A chilling photo of a little boy sitting in an ambulance in Aleppo is shocking the world. Five-year-old Omran Daqneesh was rescued from a building that had been targeted in an airstrike, which completely collapsed an hour later. The image shows a disorientated boy covered in dust and ash with blood on his face.

Omran Daqueesh’s one-year-old, six-year-old and 11-year-old siblings were also rescued alongside their parents. His 11-year-old sister waited for her mother who was caught in the rubble to be rescued before she went into the ambulance. According to a doctor working in Aleppo, Abo Mohammadian, eight people died in the strike, of which five were children. The doctor, like many others working in opposition areas, refused to give his full name for fear of reprisals against relatives in government areas. 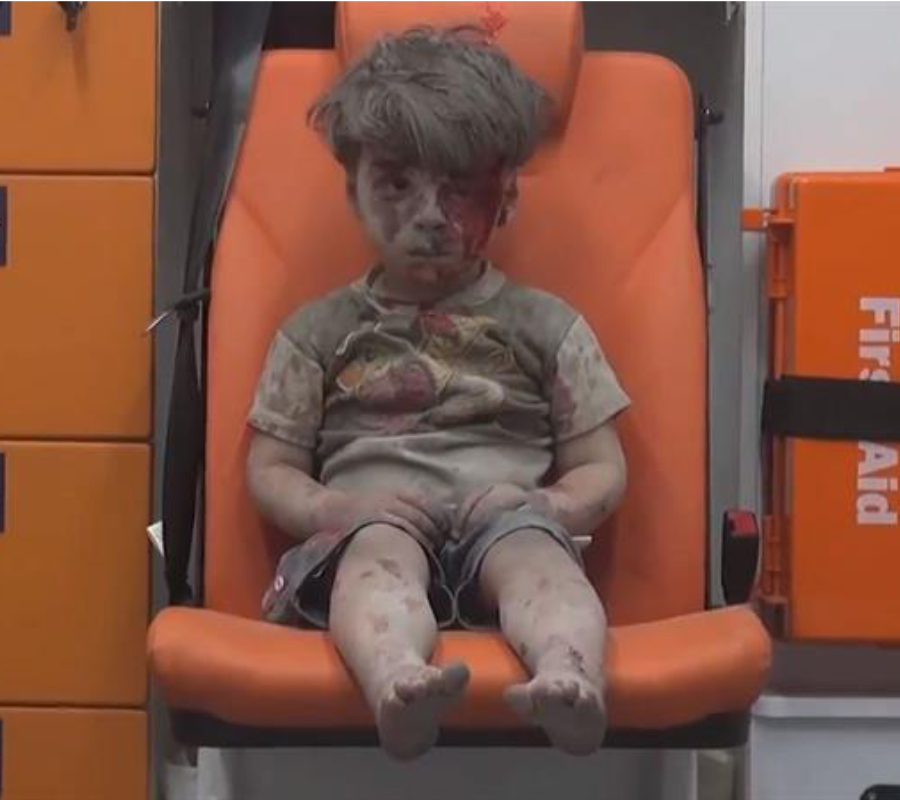 The image being used as the representation of all the children caught in the crossfire between rebel groups and the Syrian government. Image credit: EFE/ Aleppo Media Center.

According to the Britain-based Syrian Observatory for Human Rights monitoring group, Omran Daqneesh’s case is just another in Aleppo, where 233 civilians were killed amidst battles between rebel and government forces in the first two weeks of August alone.

According to the New York Times, a nurse that treated the child, Mahmoud Abu Rajab, referred to the situation as emotionally taxing. “Sometimes, you have to cry. Once, there were three children — both their parents had died — and they were just standing in front of us.”

The United Nations, called for a 48-hour weekly cease-fire to deliver supplies and general aid to the conflict-ridden city. The Russian military has announced that they will stand behind the initiative only if the aid convoys go to both rebel and government-held areas. Russian Defense Ministry spokesman, Major General Igor Konashenkov, said Russia would be ready to support deliveries as soon as next week.

The European Union, sharing the UN’s sentiment, demanded an immediate halt to fighting in Aleppo for civilians in rebel areas, to be able to receive the necessary aid they require. This immediate action both the U.N. and the E.U. are calling for was inspired by that same image of young Omran Daqneesh.

These rebel-held areas are often targets of power cuts, lack of medical supplies, shortage of food and water as well as constant airstrikes. Simultaneously, U.N. envoys and other aid workers have difficulty reaching these areas, which they say have not received deliveries in the past month.

The civil war in Syria has been an ongoing body count of innocent people caught in the middle of an array of exchanges of fire between the government and rebel groups. It is shameful how one photograph of a five-year-old boy can send the whole world into a frenzy, all the while thousands of children just like him are constantly killed but remain unrecognized because there was no photographer to capture their tragic deaths.