Victoria – Prince William, Kate Middleton and their two children, Prince George and Princess Charlotte arrived Saturday to the capital of British Columbia. The royal family has an eight-day trip ahead including visits to several cities in the country. The family was welcomed by Canadian Prime Minister Justin Trudeau and his wife, and the media will have limited access to both Princess Charlotte and Prince George.

The trip is the first overseas official visit to Princess Charlotte and the third one for Prince George, who has already visit Australia and New Zealand on official tours.

The Duke and Duchess of Cambridge are visiting the country for the second time since they got married. The first time they were in Canada they were newlyweds, and the Canadian crowds warmly welcomed them.

The official welcoming ceremony took place at British Columbia’s magnificent government buildings in the provincial capital Victoria. Thousands of people were there to greet the royal couple.

Prince William told the crowds that the first time they were in Canada, back in 2011, the Canadian population greeted them cordially, and that was very significant for the couple, and it means a lot to them. Prince William said he and Kate would never forget it. The Duke of Cambridge continued and said that because of that they are pleased that their children, George and Charlotte, can be with them in Canada to begin their lifetime of friendship with the “wonderful country.”

Still, the children did not attend the official welcome ceremony, and the airport welcoming ceremony was closed to the public. The royal couple has drastically reduced their children’s public appearances because they fear aggressive and dangerous tactics from paparazzi. The paparazzi have used concerning strategies to take pictures of Prince George, and the couple wants to protect their children from them.

The royal couple and their two kids will be mainly in British Columbia. They will stay at the Government House in Victoria, which would be the base of the family for the eight-day trip. Prince George, who is three years old, and Princess Charlotte two is 16 months old, will remain in Victoria while their parents take day trips.

The itinerary for the Duke and Duchess of Cambridge

The couple already attended a wreath-laying ceremony at the cenotaph in Victoria. The event was part of a service to honor the 158 Canadian service personnel who died during the War in Afghanistan.

Prince William and Kate will go to Vancouver on Sunday and will visit Downtown Eastside, where there are several square blocks of poverty and addiction. Once there, they will have tea with residents at Sheway, a support program for pregnant women and new mothers that are facing substance abuse and other challenges. 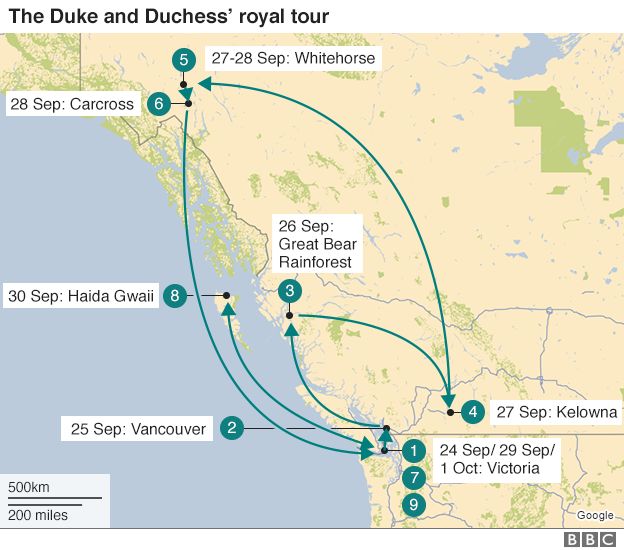 The Duke and Duchess of Cambridge will visit an immigrant welcome center to host a newly arrived family from Syria. Canada has received more than 30 thousand Syrian refugees since Prime Minister Trudeau was elected.

The couple will travel Monday to the Great Bear Rainforest and visit the Heiltsuk First Nation community. They will also attend a reception hosted by the province of British Columbia at Government House.

Other journeys in Canada include Whitehorse and Carcross, Yukon, and other cities in British Columbia such as Haida Gwaii, which is an archipelago on the northern coast of British Columbia.

The royal family ends their tour on September 30 with a public official departure ceremony at Victoria Harbour Airport.