Police Assault and Arrest Over 4,500 Demonstrators in Russia

An independent human rights organization in Russia, OVD-Info, has revealed that more than 4,500 protesters have been arrested and detained in Russia over their demand to stop the war in Ukraine. Russian police officers in riot gear attacked and arrested demonstrators chanting “No to War” in Moscow and St. Petersburg on Sunday. 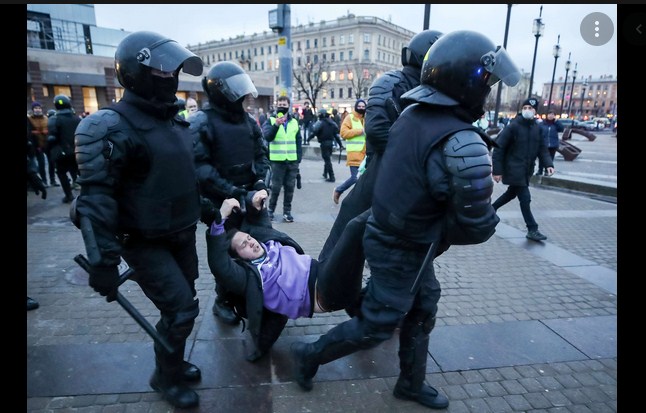 Meanwhile, President Vladimir Putin on Saturday signed legislation that makes it a punishable crime to refer to Russia’s invasion of Ukraine as a “war” or an “invasion”. This means the anti-war protesters across the country risk fines and up to 15 years in jail. Yet thousands of protesters continue to defy the government as Russia continues its offensive in neighboring Ukraine.

OVD-Info said more than 4,640 demonstrators in 56 Russian cities were arrested on Sunday, including 13 journalists and 113 children. Many of the demonstrators were assaulted with batons, stun guns, tear gas, and others were severely beaten to the point of serious injuries. The interior ministry said the people were “taking part in unauthorized rallies” and will be dealt with across the country.

A heavy presence of law enforcement in body armor and armored trucks occupied major cities. OVD-Info said at least 13,000 Russian protesters in 147 cities have been arrested since Russia invaded Ukraine on February 24. With public protests now outlawed in the country, human rights activists said Putin is showing his true colors in quelling dissenting voices, suppressing the opposition, and clamping down on rights groups and activists.

“The screws are being fully tightened – essentially we are witnessing military censorship,” said Maria Kuznetsova, OVD-Info’s spokeswoman, from Tbilisi in Georgia. “We are seeing rather big protests today – even in Siberian cities, where we only rarely saw such numbers of arrests. Each police department may have more detainees than published lists.”

Despite the clampdown on demonstrators in Russia, Ukrainian President Volodymyr Zelensky tasked Russians to continue protesting against their government until Putin calls off the war in Ukraine. On Sunday, he switched from Ukrainian to Russian to appeal to Russians that they have great interests that must be protected in Ukraine.

“It’s a fight for your country too,” he said. “If you’re silent now, then only your poverty will speak later — and it will be answered by repression.”

Top Bitcoin Casinos to Try for 2022 < Previous
Where Can I Learn About CBD From Experts? Next >
Social Connection
Latest News