Israeli police forces invaded the Al-Aqsa Mosque compound in East Jerusalem on Friday. The invasion led to the injury of at least 100 people getting injured in the violence that ensued. Police sources said they entered the mosque compound to remove stones and rocks that worshipers had collected in anticipation of violence. 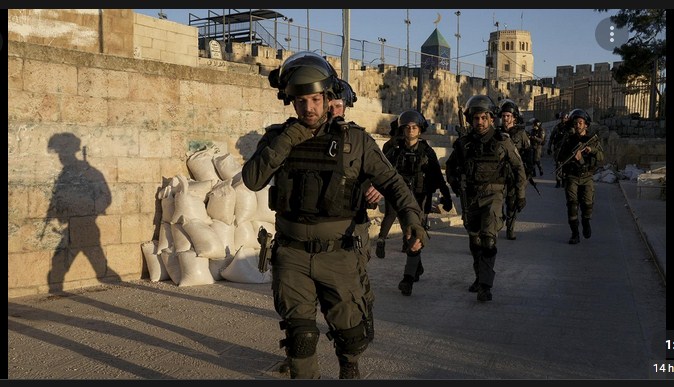 Police said they had waited till after the Friday worship service before entering the mosque compound. Social media videos show Palestinians hurling stones at the nearby Western Wall where Jews worship, and police responding with stun grenades and tear gas. Several Palestinians hid in the mosque while the clash outside intensified.

The Palestinian Red Crescent, which transported most of the wounded to hospitals, reported that a security guard was shot in the eye with a rubber bullet. The organization accused Israeli forces of preventing help from reaching injured worshipers, who barricaded themselves inside the mosque out of fear of being killed.

The Al-Alqa Mosque is a holy site that is sacred to Jews and Muslims in Jerusalem and is the center of several violent clashes between Israelis and Palestinians in the past. The concurrence of the Muslim Ramadan fast and the Christian celebration of Easter, as well as the Jewish Passover, has fueled concerns that violence may erupt at the mosque, and law enforcement remains ready to deal with the situation.

The Israeli Foreign Ministry stated that more than 12 masked men carrying Palestinian and Hamas flags were observed entering the mosque on Friday. “Police were forced to enter the grounds to disperse the crowd and remove the stones and rocks, in order to prevent further violence,” they said.

Israeli national security minister, Omer Barlev, said it was not the intention of police officers to respond violently to worshipers at the mosque, but they were forced to act when Palestinian elements attacked with iron bars and stones. Barlev is in charge of the police force in Israel. He said Jews and Muslims enjoy the freedom of movement and worship in the country, but no one would be allowed to collect missiles and crude weapons that could be deployed for violence.

A police raid on the Al-Aqsa mosque following massive protests during Ramadan spun off into Israeli forces laying siege to the disputed Gaza Strip – an offensive that led to the death of 260 Palestinians and 13 Israelis. Hamas has called on militant groups in Gaza and elsewhere to avenge Palestinians wounded at the mosque and to “stand by our people in Jerusalem.”

Science Has Spoken: Gaming Can Be a Healthy Pursuit < Previous
Shenzhou 13: Three Chinese Astronauts Return to Earth after 183 Days in Space Next >
Social Connection
Latest News