The founder of Facebook, Mark Zuckerberg and his wife Priscilla Chan visited Rome and Vatican City and had the chance to meet Pope Francis on Monday. During the meeting, Zuckerberg gave to the Pope one of the Facebook drones that will bring internet access to developing countries as part of his idea of communication to alleviate poverty, a goal both men have in common.

The Vatican Press Office said in a statement that the 32-year-old CEO and the leader of the Catholic Church talked about how to use communications technology to help reducing poverty and encourage a culture of encounter. Though communication, Zuckerberg, and Pope Francis agreed that messages of hope could be delivered to the most disadvantaged.

Facebook co-founder showed the Pope, a model of Facebook’s solar-powered aircraft, Aquila, that will give internet connectivity to places that do not have access to it. According to the social media company, Aquila will be able to fly for up to three months at a time and provide Internet signals to the ground as high as 60,000 feet.

The initiative behind Aquila is called Internet.org, and its goal is to help people to communicate with others all over the world to make a positive cultural impact.

Zuckerberg wrote in a Facebook post that he and Priscilla were honored to meet the Pope, a person they both admire because of his messages of mercy and tenderness. They look up to how he has found new ways to communicate with people no matter their religion around the world, and they want to do the same with Aquila and other technologies to reduce poverty and cultural isolation.

Mark said in the post that he and the Pope discussed the importance of connecting people, including those who do not have access to the internet.

But the model of the plane was not the only gift Pope Francis received from the couple. Zuckerberg and Priscilla also gave him a book they both made about people using the internet in new ways as part of the Chan-Zuckerberg Initiative to help people around the globe.

Facebook CEO said that meeting the Pope was an experience neither he or his wife will never forget. Zuckerberg stated you could feel his warmth and kindness and how deeply he cares about helping people. 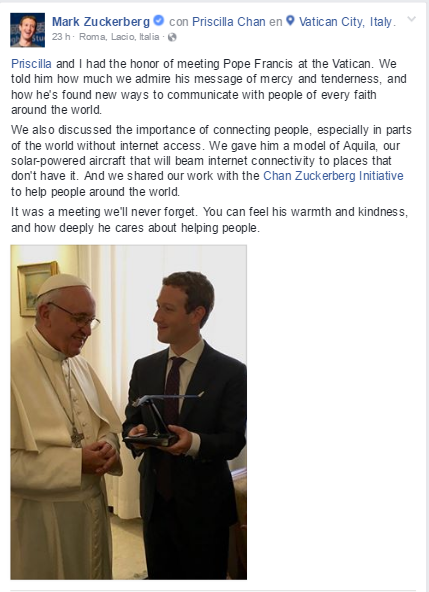 Pope Francis is known as a social media star since the beginning of his papacy in 2013, The Washington Post reports. The Pope joined Instagram recently and already has 3.1 million followers.

Mark and Priscilla celebrated their honeymoon in Rome and Zuckerberg was excited to be back. The couple went to a wedding of a friend near Lake Como, where Spotify co-founder Daniel EK was also seen, according to The Daily Mail.

Zuckerberg posted on his wall that they started their first day in Italy with a run past the Circus Maximus and House of Augustus up to the Colosseum.

On Monday, the young CEO held a Townhall Q&A to connect and spend time with Facebook’s Italian community, who recently experienced a devastating earthquake.

The U.S. has already received 10,000 Syrian refugees < Previous
How to improve interactions between police and mentally ill people Next >