A two-year-old boy has been rescued after being swallowed halfway by a hippo in Uganda. According to the police, the hippo strayed from Lake Edward in the Katwe-Kabatoro district of western Uganda and attacked the boy on the afternoon of December 4. The boy, who had been playing outside his home in Rwenjubu, is identified as Paul Iga. 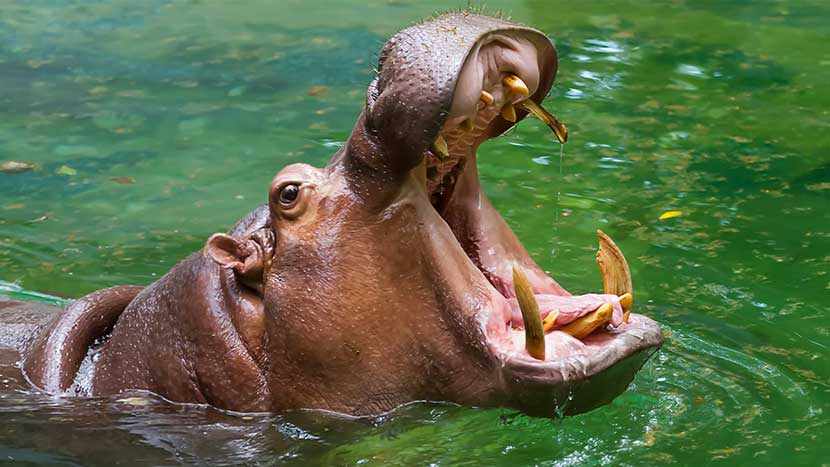 The police said a passerby, identified as Chrispas Bagonza, realized what was happened and quickly pelted the hippo with stones. The scared animal quickly ejected the half-swallowed boy and ran to the river. “It took the bravery of one Chrispas Bagonza, who was nearby, to save the victim after he stoned the hippo and scared it, causing it to release the victim from its mouth,” a spokesperson for Uganda Police Force said.

The kid, who sustained an injury to one arm, was rushed to Bwera Hospital where he was vaccinated against rabies and then treated. He was later discharged to his parents after he made full recovery, the police said. The authorities warned that hippos are dangerous animals and that they can view people as threats and act accordingly.

“Although the hippo was scared back into the lake, all residents near animal sanctuaries and habitats should know that wild animal are very dangerous,” the police said in a statement. “Instinctually, wild animals see humans as a threat, and any interaction can cause them to act strangely or aggressively.”

Live Science states that hippos are the third-largest animal on land, and they can weigh 3,000 to 10,000 pounds. They can also grow as long as 10 feet and attain a height of five feet. National Geographic says their strong teeth can snap a canoe into two, and the National Library of Medicine says they are very aggressive and dangerous land animals. Their teeth can reach 20 inches in length, and they often feed on dead animals, even though they are primarily herbivorous.