The Duchess of Cambridge, Kate Middleton, showed up unannounced at Sarah Everard’s memorial which held on Saturday to pay her respects. Everard, 33, was reportedly kidnapped and murdered by 48-year-old Wayne Couzens, a police constable with the Parliamentary and Diplomatic Protection Command. The death of Everard has generated global reactions with many women in London coming out on social media to tell stories of how unsafe they feel walking the streets of the city at night. 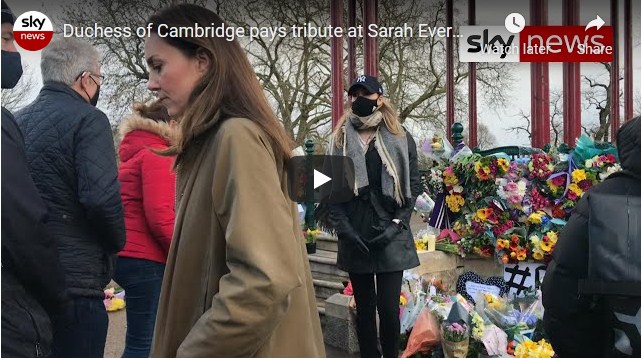 Everard disappeared on March 3 after leaving the house of her friend around Brixton by 9 pm, but her body was discovered on March 12. Hundreds of people gathered for her memorial in Clapham Common, close to Brixton, and Kate Middleton had attended the event in a private capacity “to pay her respects to Sarah and her family; she remembers what it felt like to walk around London at night,” a royal insider revealed.

Organizers of the memorial also planned to hold a vigil, but the Metropolitan Police would not allow it because of the risk of COVID-19 infections. Police commander Catherine Roper said the authorities cannot undo the hard work of the NHS at reducing coronavirus transmission rate by allowing people to gather for a vigil.

“No woman in London should be unsafe on London’s streets and I understand the strength of feeling that has grown following Sarah’s disappearance,” Roper said. “As a woman and a police officer, I want nothing more than for women to feel safe and protected by the police. But we need to be clear. Our city is still in a battle with Covid-19 with people continuing to be infected and sadly losing their lives.”

Constable Couzens appeared for his first hearing in court at the Westminster Magistrates Court on Saturday and will appear again on Tuesday for his second hearing. He is charged with the kidnap and murder of Everard, but it is not immediately clear if he has a lawyer to represent him. The Reclaim These Streets group launched a fundraiser for Everard after a scheduled vigil for her was canceled and the campaign hit the target of £320,000 (around $445,000) in no time. The fund will be distributed to women’s causes.