James Webb Space Telescope to Be Launched On Christmas Day

Mission managers at NASA revealed that the launch of the James Webb Space Telescope has been shifted to Christmas Day. The world’s largest space telescope will be launched from the Guiana Space Center in South America from 7:20 a.m. EST on Saturday morning within a 32-minute window. The telescope will launch aboard an Ariane 5 rocket operated by Arianespace. 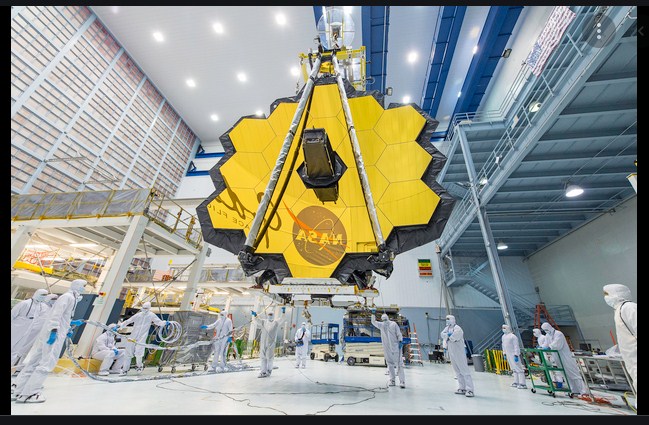 The launch is being overseen by NASA, ESA, and the French space agency CNES, and the actual launch process will take about two hours from initiation to execution. Representatives from the major partners met on Tuesday to review launching preparations as they relate to the telescope, the Ariane 5 launcher, and the launch range at the French-run Guiana Space Center.

The review team also analyzed the possibilities and impacts of heavy rainstorms, risks of lightning, and high-altitude winds. The team agreed that the rollout can proceed for December 25 morning. It is agreed that weather will permit for a successful launch and serious risks have been mitigated. NASA Administrator Bill Nelson said he is elated at the prospect of the launch, and that big risks must be taken to achieve high-impact endeavors.

“This is an extraordinary mission,” Nelson said. “It’s a shining example of what we can accomplish when you dream big. We’ve always known that this project would be a risky endeavor, and of course, if you want a big reward, you have to usually take a big risk.”

He added that major world-changing projects take decades to achieve, with lots of challenges along the way. He noted that the construction and approaching deployment of the James Webb Telescope is no exception.

“And it’s one of the great engineering feats, not just for NASA and our international partners, but also for the people of this planet. This space telescope has been decades in the making. And as with most extraordinary projects that are transformative, there have been some speed bumps. There have been some setbacks along the way.”

Constructing the telescope costs $9.7 billion and took more than 10 years to build. It is the largest space observatory in the world and 100 times more powerful than the Hubble Space Telescope, which has been in use for 31 years now. The James Webb Space Telescope weighs 13,700 pounds and is designed to see infrared light from the earliest galaxies in the universe.

James Webb has a wide mirror measuring 21 feet across, while Hubble’s mirror is about 8 feet, and NASA’s Spitzer has 2.7 feet. Hubble Telescope orbits Earth at about 340 miles up into space, James Webb will reside 930,000 miles beyond Earth at the L2 point where the Earth’s and Sun’s gravitational pull balance out that of any satellite such as a telescope. After it is launched, it will take 29 days for the telescope to reach its destination and about six months to cool down and calibrate before it begins to work.