Scientists from the UK, China, and Canada are currently studying a fossilized dinosaur egg containing a well-preserved dinosaur baby curled up like a chick. The 70-million-year-old egg was found by miners from Yingliang Group in Ganzhou in the Jiangxi Province of southern China. 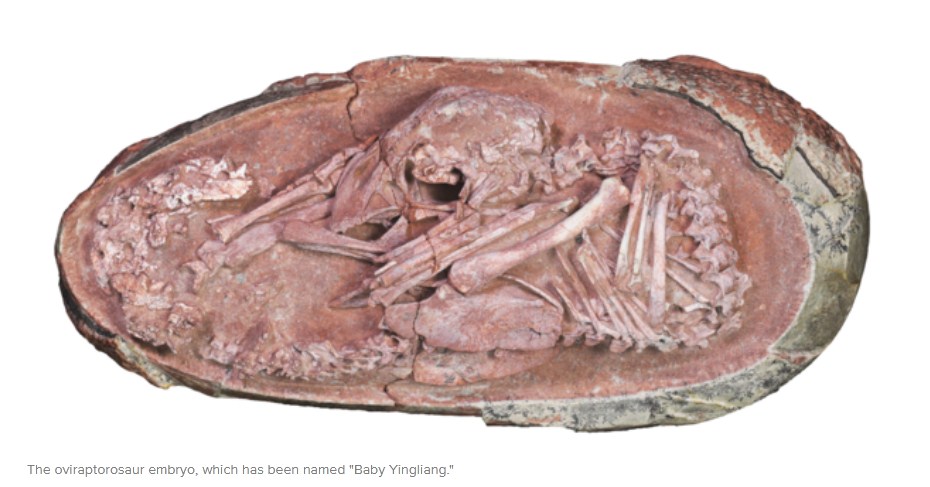 Together with other stones suspected to be of great value, the fossilized dinosaur egg was stored away for 10 years and forgotten until workers working on the Yingliang Stone Natural History Museum found it again while sorting through mined stones. Then researchers acquired it in 2000 after finding it was a dinosaur egg containing an embryo.

The dinosaur baby embryo was named “Baby Yingliang” in a study published in the journal iScience. Lida Xing of the China University of Geosciences in Beijing said museum staff knew the egg contained an embryo when they found that another one broken across had a bony leg sticking out. Darla Zelenitsky of the University of Calgary in Canada said it was a lucky find since dinosaur baby bones are very tiny and fragile and rarely preserved as fossils.

“It is an amazing specimen…I have been working on dinosaur eggs for 25 years and have yet to see anything like it,” said Zelenitsky. “Up until now, little has been known of what was going on inside a dinosaur’s egg prior to hatching, as there are so few embryonic skeletons, particularly those that are complete and preserved in a life pose.”

The dinosaur embryo measured about 27 centimeters (11 inches) from head to tail and might have grown up to 2-3 meters had it lived to adulthood. The fossilized egg in which it was found measured around 17 centimeters (7 inches) long. The position in which the embryo was found made researchers to believe that dinosaur babies constantly changed positions in their eggs, just like birds, before they were hatched.

“Most known non-avian dinosaur embryos are incomplete with skeletons disarticulated (bones separated at the joints),” said Waisum Ma of the University of Birmingham, UK. “We were surprised to see this embryo beautifully preserved inside a dinosaur egg, lying in a bird-like posture. This posture had not been recognized in non-avian dinosaurs before.”

Science believes that birds descended from theropods – a branch of two-legged dinosaurs – and that their hatching behavior may have been inherited from ancient dinosaurs. Just the way birds sit on eggs to hatch them, researchers believe dinosaurs also hatched their eggs by sitting on them and passed this trait to modern birds.