Home » Headlines » Editorials » How Good Is AR 15 Accuracy If You Don’t Spend a Lot of Money?

How Good Is AR 15 Accuracy If You Don’t Spend a Lot of Money?

Are you trying to find a good AR 15 that won’t break the bank? Read this article to learn more about AR 15 accuracy and if you need to spend more money. 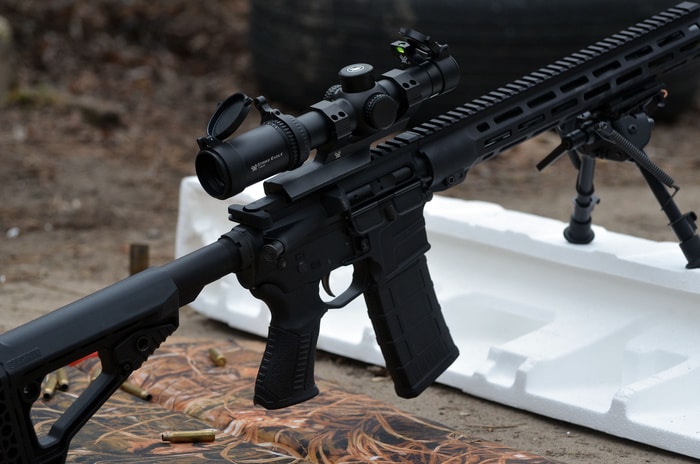 The most popular gun in America, otherwise known as “America’s rifle,” according to the NRA, is the AR-15. So why is this gun so popular? Because AR-15 accuracy is top-notch compared to other rifles.

People are using the AR-15 not only for defense but for recreation and competition purposes as well. Many are drawn to this rifle because the AR-15 is specifically designed for accuracy. All of these uses attract all kinds of people, and everyone loves a good bargain even when it comes to buying a rifle.

Just how accurate is an AR-15 if you don’t spend a lot of money?

An AR-15 is a lightweight semi-automatic rifle that can carry more rounds easily. Contrary to popular belief, the AR in AR-15 stands for Armalite, not assault rifle or automatic rifle. The first one of its kind was manufactured in 1958 by Eugene Stoner for ArmaLite, which is where its name was originated from.

Armalite developed the AR-15 to be used as a military rifle, but with little success in sales, Armalite sold it to another company, Colt. Colt was selected by the United States military during the Vietnam war to manufacture an automatic rifle known as the M-16.

The success of the M-16 inspired Colt to produce a semiautomatic version that was made in part by Armalite’s original design. This new product, named the AR-15, was not only sold to law enforcement, but also to the public.

Although the two rifles are similar in style, the M-16 is an automatic rifle, automatically shooting multiple bullets while the AR-15 only fires one bullet per shot.

Those on a budget who want an accurate and good quality out of the box AR-15 will have to spend around $1000-1200. Even higher-end AR-15’s are available for much more dough but don’t bring a lot of extra necessities to the table.

Of course, you can always buy a stripped-down version of these out of the box products that will be cheaper but require you to fill in some of the hardware. Luckily, there are AR 15 stock sites that have affordable accessories for an AR-15.

An AR-15 stock doesn’t just have to be used for stripped-down versions. Replacing parts of your AR-15 with new accessories is part of the fun and can help with AR-15 accuracy.

Buying an upper and lower separately can save you some money because you can buy half of the weapon at one time and the other half later.

How Much Money Should I Spend on an AR-15?

As with anything, buying the more expensive option usually means you are getting the best quality, but this does not necessarily apply when you’re looking to buy an AR-15.

Because an AR-15 is already a rifle known for its accuracy, it’s easy to find a good one that is within your budget. It is the most popular civilian rifle for a reason.

The weapons can be purchased for less than $1000 but can also be customized and cost extra thousands of dollars depending on what is added. Although these rifles can go for less than a thousand in some cases, it is recommended not to purchase those that are bottom of the barrel prices if being used for competition because the life of the rifle will be short, and the quality will just be okay.

Yet, an okay quality assault rifle will still give you accuracy in shooting and work well for those who are purchasing their first AR-15. If you’re looking to own an AR-15 just for defense purposes, buying a cheap out of the box version is not a bad idea. Keeping the rifle away, unless needed for an emergency, means you’d be shooting it less, so the life of the rifle won’t be affected as much.

Those who have never owned a rifle before should work their way up to the top tier rifles. There are many manufacturers who sell AR-15’s for those just beginning and on a budget. Adequate budget manufacturers still sell good guns, even for those looking to find an accurate AR-15.

Beginners should also keep in mind that these rifles take time to understand. Buying a budget AR-15 is part of the learning process. It is important for those who have never owned a rifle to start small and work your way up, not only to high-end rifles but to building your own AR-15.

What Should I Look For in an AR-15 for Accuracy?

According to Federal Law, the minimum barrel length is 16 inches which can achieve the accuracy that people buy AR-15’s for. Because a 16-inch barrel is stiffer, it is less affected by barrel whip.

Longer barrels can achieve more powerful and more accurate shots because the longer barrel allows more space for the powder to burn and the bullet to speed up. Bullets that move faster give less time for any factors, such as wind, to negatively affect the trajectory of the bullet. 16-inch barrels can shoot accurately, but other popular long barrel lengths are 18 inches and 20 inches.

Barrel material is important to look at when wanting an AR-15 that can accurately shoot. Stainless steel is the most accurate material you can get for a barrel, but it won’t last as long as other materials. A stainless-steel barrel can cost you around $275 depending on the manufacturer.

Chrome Lined barrels are the most popular form of barrel lining because the coating gives a longer life to your barrel. Although this is a plus for those looking for a rifle to outlive them, the accuracy could be affected by this lining.

Those who are just now joining the AR-15 game are advised to stick to light or medium barrel contours.

Another thing to look out for when buying an AR-15 is the gas systems. There are two primary systems for this rifle, Direct Impingement (DI) and Piston. DI is the more accurate of the two primary types of gases, it is also less expensive than the Piston gas system.

The DI gas system is the original design and therefore works well for almost all purposes a person uses an AR-15 for.

Hand-guards are important to keep in mind when it comes to accuracy. Generally, non-free-floating hand-guards are used and can lead to inconsistency. This means that the accuracy of the shooting can be affected. But, even the non-free-floater device is accurate enough unless you need an AR-15 for competitive shooting.

So how good is AR-15 accuracy if you don’t spend a lot of money? The short answer to this question is the accuracy is still pretty good on a budget.

Because the AR-15 is known for being a rifle specifically designed for accuracy, it is easy to find one on the budget side that can be accurate. The money you could spend on higher-end rifles does not always equate to more accuracy.

Those looking for accuracy, whether it be for hunting, competing, or defense purposes can find it in a relatively inexpensive AR-15. It is recommended that you buy a factory out of the box AR-15 or buy the upper and lower separately rather than build if you are wanting to save money.

Luckily, options are readily available to customers if you are looking to upgrade your AR-15 for even more accuracy. The good thing about replacements and additions to your AR-15 is that you don’t have to spend money on it all at once. You can slowly create the AR-15 of your dreams without having to break the bank.

How to Utilize QMS Software to Improve Your Business < Previous
Captain Martin Becher: The man who helped create horse racing’s biggest showpiece Next >