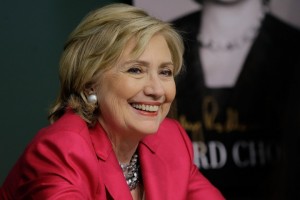 According to sources familiar with her plans, Hillary Clinton is poised to announce a presidential bid on Sunday. The announcement is expected to be made via video and social media. The sources of the information declined to be identified and a representative for Clinton declined to comment on the matter. Clinton’s announcement will stand in stark contrast to the announcements made by Republican competitors Ted Cruz and Rand Paul, who both announced their 2016 campaigns at large televised events.

After the announcement, Clinton plans to travel to several small events in the key early voting states of Iowa and New Hampshire. At these events, she plans to answer questions from potential votes and lay out her case for why they should vote for her to be president. Today, Clinton is releasing an update to her memoir, “Hard Choices,” an accounting of her final days as secretary of state and her feelings about becoming a grandmother for the first time. Some expect that the contents of the book will make her more relatable to ordinary Americans.

Speculation that Clinton would be entering the presidential race have been swirling for months. The announcement that she intends to seek the Democratic presidential nomination in 2016 will come as no surprise to many voters after her bid for the nomination back in 2008, which ultimately went to Barack Obama. Obama went on to win the presidency twice, staying in office for the longest amount of time for a president.

Clinton is currently viewed as the heavy favorite for the nomination, with her experience as First Lady to President Bill Clinton and as Secretary of State under President Obama swinging many voters to her side. She has also served as a senator from New York. She already enjoys considerable name recognition, which could both help her and hurt her as she tries to secure her party’s nomination for the highest job in the land. If she were to win the presidency, she would be the first female President of the United States, a historic achievement.

Competition for the Democratic nomination is expected to be limited for Clinton. Few Democrats have taken steps toward securing a bid so far and none of them has the name recognition that Clinton enjoys.