A suspected arson attack at a psychiatric hospital in Osaka, Japan, has left at least 24 people dead on Friday. National news medium NHK said 27 injured people were evacuated from the inferno, but 24 of them were confirmed dead by Friday evening, while the status of the remaining three remains unclear. Authorities said it is the worst fire outbreak in nearly 20 years. 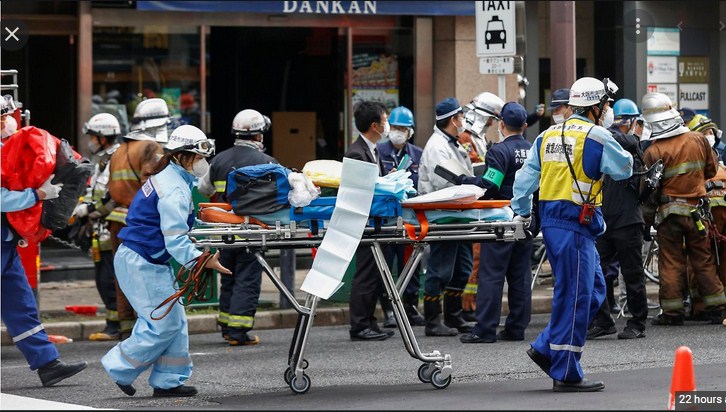 Local media said the fire outbreak started at the psychiatric clinic which was located on the fourth floor of an eight-story building around 10:30 a.m. but it was contained within 30 minutes after the fire service responded.

Police think the fire may have been an accident or arson, and they are suspecting an elderly man who was seen holding a leaking paper bag earlier on Friday. Authorities believe the paper bag may have been petrol which was used to ignite a fire on the clinic, leading to a conflagration that burned property and left most things charred at the clinic.

Most of the victims of the inferno were aged 20-60 and believed to be attending a psychiatric session for the mentally ill. The clinic is not very large but about 215 square feet of space is gutted by the fire.

The last time a serious arson was reported in Japan was in 2019 when the Kyoto Animation Studio was gutted. More than 34 people were injured in the fire attack and 36 people died. In 2001, 44 people lost their lives following an inferno in Shinjuku when a big building in Tokyo burned.

The eight-story building in which the recent conflagration occurred houses a beauty salon, a clothing store, and an English-language school apart from other businesses. The building is in a district where nightclubs and bars are abundant and is also close to a high-traffic train station. Other media reported that 28 people were injured in the inferno and that 27 reportedly died.

What Tech Gifts are Flying Off the Shelves This Season? < Previous
Which Region Is Leading the Virtual Data Room Market in 2021? Next >