The military in Ethiopia has launched an airstrike that killed 64 people and wounded 100 others in a marketplace in Tigray. The Ethiopian military which earlier denied the attack later claimed responsibility for it, saying it was a precision attack that targeted rebels in civilian clothes in the market. Health workers said the military did not allow them to access the market in order to evacuate the dead or treat the wounded, many of them children. 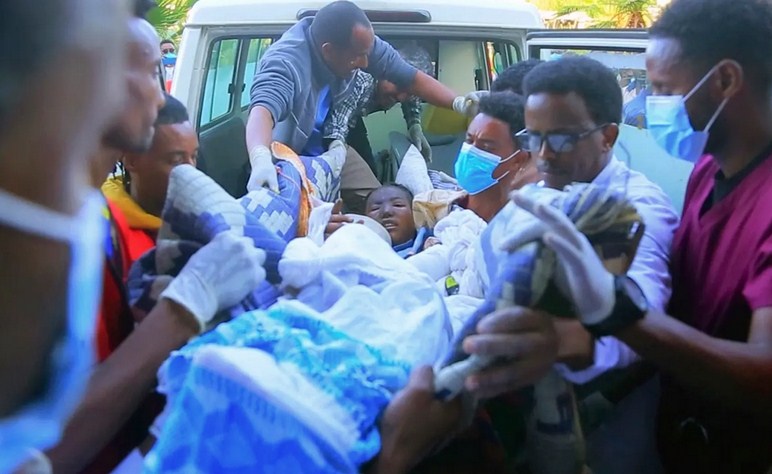 The incident occurred on Thursday in the village of Togoga, and a medical doctor who spoke on condition of anonymity out of fear of reprisal said the situation was very horrible. He said the attack left many dead people unattended, while the wounded cried for medical help on the ground. “It was very traumatizing,” he said. “I think most of the patients; died because we were late there because care wasn’t available.”

The doctor said most of the victims of the attack were mothers, children, and elderly men, with a few young men. He said he was able to access the area and helped in the evacuation of the injured to neighboring hospitals, but it was almost too late for many people. Military spokesman Col. Getnet Adane, said local fighters supporting the former leaders of the Tigray region were targeted after assembling to celebrate Martyrs’ Day.

“The Ethiopian air force uses the latest technology, so it conducted a precision strike that was successful,” Adane said.

The international community has condemned the airstrike and called for an independent investigation into what happened. The airstrike is one of the deadliest military offensives in the eight-month civil war between the Ethiopian government and the opposition in the northern Tigray region of the country. The United States said the attack is very appalling, and State Department spokesman Ned Price declared that “we strongly condemn this reprehensible act.”

The European Union has also lent its voice to condemn the military attack, calling it a human rights violation that was the culmination of months of famine, sexual violence, and killings in the Tigray region. They said the event is “extremely worrying” and further condemned the reported blockage of health services from attending to the injured.

“This is yet another attack adding up to the horrific series of International Humanitarian Law and human rights violations, atrocities, ethnic violence, combined with serious allegations of use of starvation and sexual violence as weapons of conflict,” the European External Action Service wrote. “The EU strongly condemns the deliberate targeting of civilians.”

Prime Minister Abiy Ahmed who received the Nobel Peace Prize in 2019 for resolving the age-long conflict with neighboring Eritrea has also come under intense condemnations for the Tigray military airstrike. Since the Tigray conflict started in November 2020, thousands of people have been killed and over two million people displaced from their local communities.

Virgin Galactic Gets FAA Approval to Fly Passengers to Space; Company Shares Soar < Previous
Why Family Health Insurance is a Must for your Family? Next >