Home » Headlines » U.S. » Elon Musk Boasts of His Preference for Ron DeSantis in the 2024 Presidency

Tech billionaire Elon Musk has voiced his preference for Florida Gov. Ron DeSantis to become the next American president if he runs in 2024. DeSantis, who recently defeated Democratic opponent Charlie Crist to win a second term as Florida governor, is considered a major contender against former President Donald Trump, who has declared his intention to contest the 2024 presidential election. 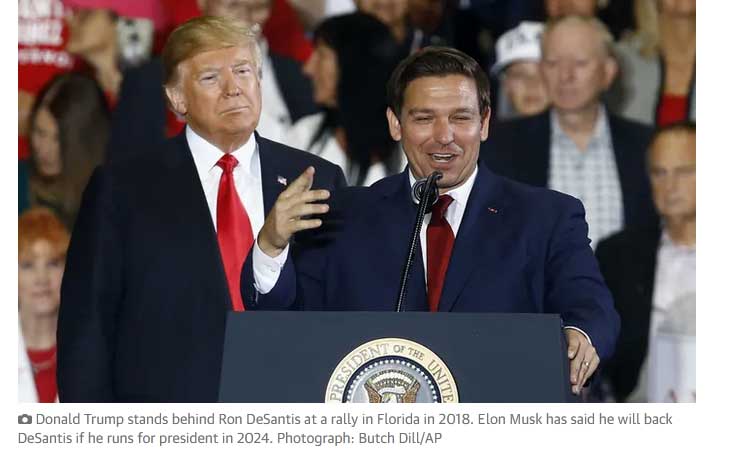 Earlier in June, Musk declared he would support DeSantis for the presidency in 2024 if he ran, and that he has a better chance of beating incumbent President Joe Biden in the election. He stated that he wants DeSantis to become the next president over Biden and Trump because Biden’s administration has proven a disappointment to him.

“Yes. My preference for the 2024 presidency is someone sensible and centrist,” Musk stated. “I had hoped that would the case for the Biden administration, but have been disappointed so far. As a reminder, I was a significant supporter of the Obama-Biden presidency and (reluctantly) voted for Biden over Trump.”

Musk, the new CEO of Twitter, is a white South African who grew up in South Africa. With his public declaration for DeSantis, the incumbent Florida governor revealed that “what can I say? I welcome support from African-Americans.”

This is the first time in recent times that Musk would publicly declare his preferred candidate for the next American president. Given that it is highly likely that DeSantis may contend with Trump for the Republican nomination, many observers think the governor may have better chance of clinching the ticket than Trump, who backed key candidates who lost on the Republican platform.

Musk had wanted Americans to vote for Republicans to occupy congressional seats in the midterm elections, in order to counterbalance the number of Democrats in the House, but the Republicans fielded lost despite Trump’s support. Ultimately, Democrats retained the Senate, but Republicans managed to have a majority of number in the House of Representatives. So it is understandable why Musk would back DeSantis against Trump in the 2024 presidential election if the governor runs.