The year 2020 did not make the ongoing fight against homelessness any easier for communities like San Diego. However, because of a partnership between a businessman and a priest, San Diego has strong warriors on the crisis’s front line that make a difference. 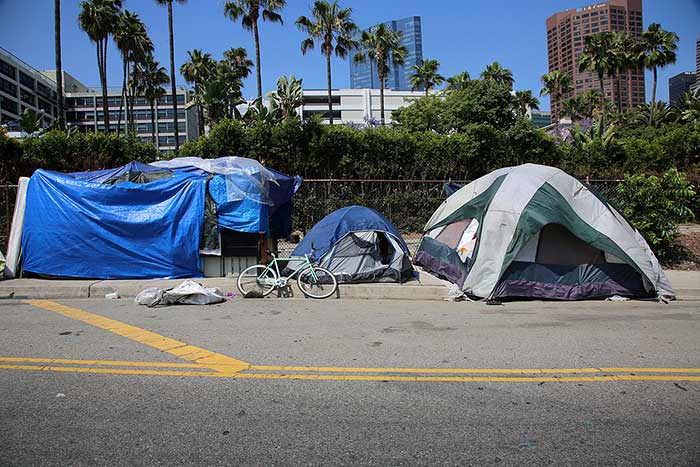 David Malcolm is a businessman in San Diego who is known by many for his dedication to philanthropy and public and community service. Malcolm has gone above and beyond for his fellow San Diegans during his tenure as a Chula Vista City Councilmember and serving as a board member on multiple public and private organizations, including San Diego Christian College, American Cancer Society, St. Vincent de Paul, and San Diego History Center. He also volunteers at Meals on Wheels and has been an AYSO soccer coach as well as a coach for little league baseball.

Above all that he has done in giving back to others, Malcolm’s heartstrings are pulled the hardest when it comes to helping those who are homeless get back on their feet with dignity.

According to San Diego’s Regional Task Force on the Homeless’ Homelessness Crisis Response System, the number of individuals who become homeless for the first time almost doubled in 2019. From April 2020 to June 2020, that number reached its highest point. The amount of first-time homeless individuals was 2,300 in 2019, rising to 4,100 in 2020. Twenty-six percent of people who were once homeless returned to homelessness in 2020, which was a slight rate increase compared to a twenty-four percent return in both 2018 and 2019. The San Diego homeless system-aided more than 38,000 individuals.

“There is no ‘fairy dust’ or single cure to homelessness,” said Malcolm.

“Every individual must be accessed and then have the necessary services provided for their individual needs. These services must be provided to the homeless in the area they reside. What good does it do to give a list with remote addresses of service providers like Alcohol Addiction, Drug Addiction, Mental Services, Social Security, Veterans Services, Computer Labs, or Medical Doctors to a person who doesn’t have a car or the ability to travel several miles?

“Father Joe Carroll and Father Joe’s Villages provided all these services on-site to make sure the homeless received the treatment they needed,” he added.

It was his passion to succor the homeless that led Malcolm to build a relationship and powerful team with Father Joe. For thirty-one years, Malcolm served on the Executive Board of St. Vincent de Paul Management, and for four of those years, Malcolm was the Chair of the Board.

As President of Cal West Apartments, a provider of quality rental housing in San Diego, along with his five decades of real estate experience, Malcolm was first inspired to work with Father Joe to combat homelessness in San Diego communities because of Father Joe’s natural gift to change lives.

“Father Joe is one of the most dynamic individuals you will ever meet,” he stated. “Having an opportunity to work side by side with Father Joe and getting the homeless back into productive society with dignity was an opportunity I couldn’t pass up. Father Joe’s past success of reuniting families and changing lives of the less fortunate was something I wanted to be part of,” said David Malcolm.

In 1940, Father Joe was born in the Bronx, where his parents raised him along with his seven sisters and brothers. On the other side of the street from his childhood home was St. Joseph Church. Father Joe decided to enter the seminary in 1963 when he moved to Southern California from the Bronx.

The San Diego priest became ordained a Catholic priest in 1974. He then spent the following eight years in parish work. When Bishop Leo Maher needed someone to lead the St. Vincent de Paul Center, the Bishop’s clergy personnel board recommended Father Joe as the right man for the job. The Bishop insisted that Father Joe take the opportunity.

Father Joe filled his new shoes with a head-strong dedication. He researched homeless service providers by traveling all over the nation. At the time, he found nothing that struck him as an inspirational example to follow. Father Joe developed a fresh, new one-stop approach to provide the homeless with the services they needed. The process he created was the foundation for Father Joe’s Villages and St. Vincent de Paul Village.

The dynamic duo of Father Joe and David Malcolm believes that the best way to approach homelessness in San Diego is to address individuals with proper care first rather than housing first. San Diego has adopted the Housing First Model, which immensely disappointed Father Joe.

As David Malcolm explains it, “If a person is an addict, alcoholic, or has a mental issue, they don’t need housing first; they need proper care first. My brother committed suicide due to drugs and alcohol. I believe he would be alive today if my family would have shown my brother ‘tough love.’”

“Father Joe and I stood together and told the City Council in 2012 that if they adopted the Housing First approach versus getting the Homeless Better First approach, they would see a doubling of the homeless population. The City Council replied that they would solve the homeless issue within five years. The elected officials got it wrong, and Father Joe was right. Not a surprise,” said Malcolm.

“Housing First maybe a visibility solution, but it is not the truly humane solution,” he concluded.

David Malcolm is a San Diego-based entrepreneur, real estate expert, and community leader. Having a long and successful career in real estate, he knows the importance of giving back. Among his various philanthropic endeavors, he is most passionate about helping the homeless get their lives back on track. He and his wife Annie also support two San Diego gymnasiums and other charitable non-profits.

How to Create the Ultimate Game Room < Previous
Should You Take CBD Gummies For Pain And Stress Management? Next >