Chancellor of the Exchequer, Kwasi Kwarteng, has been fired by British Prime Minister Liz Truss. The former finance minister spent just 38 days on the job before being replaced by Jeremy Hunt, former Britain’s foreign secretary, who lost the Conservative Party leadership to Boris Johnson in 2019. 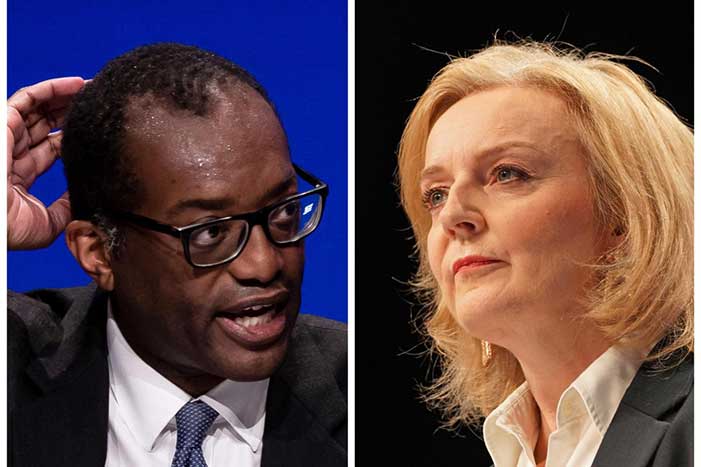 Truss allegedly asked Kwarteng to resign after her government slashed taxes that roiled the financial markets at a time when mortgage rates are climbing, unions are striking, energy prices are spiking, and costs of living are skyrocketing. Journalists and members of the opposition are even querying the prime minister for letting her finance minister take the fall when he actually did what she had promised during her campaigns to do – cut taxes for high-earners and big corporations.

“You have asked me to stand aside as your Chancellor,” Kwarteng tweeted on Friday. “I have accepted. It is important now as we move forward to emphasize your government’s commitment to fiscal discipline.”

And in a hypocritical letter to Kwarteng on Friday, Truss told him that “I deeply respect the decision you have taken today.” But in a short news conference that lasted only 10 minutes on Friday, journalists grilled the prime minister with four major questions about the latest Kwarteng events that caught her floundering.

One journalist asked her why she sacked Kwarteng as minister of finance when he was actually carrying out her mandate. And another reporter asked, “how come you get to stay?” if Kwarteng had to go. Yet another bold journalist fired at her: “What credibility do you have to keep on governing?” while another shouted at her as she left the news conference: “Aren’t you going to say sorry?” But PM Truss kept on walking without looking back.

While Truss has emphasized that “my priority is ensuring our country’s economic stability” without necessarily outlining how she was going to get that done; the Bank of England intervened to stop the economy from collapsing on Friday. Meanwhile, having spent less than two months as prime minister, political and economic analysts opine that Truss may be ousted from office before the January 2025 election.

One analyst said Conservative MPs are plotting to oust her before Christmas, while some other lawmakers think former chancellor Rishi Sunak and Penny Mordaunt may make a better team. But Labour leader Keir Starmer actually wants Truss out of the office and noted that her firing Kwarteng cannot undo the damage of her economic policies.

“Liz Truss’ reckless approach has crashed the economy, causing mortgages to skyrocket, and has undermined Britain’s standing on the world stage,” Starmer wrote on Twitter. “We need a change in Government. With my leadership, Labour will secure Britain’s economy and get us out of this mess.”