A recent scientific study published in the journal Science has confirmed that boom sounds that emanated from a volcanic eruption in the South Pacific island of Tonga were heard in Alaska. The Tonga eruption developed undersea on January 14 and erupted on January 15 – and its sounds were heard audibly more than 10,000 kilometers (6,000 miles) away in Alaska. 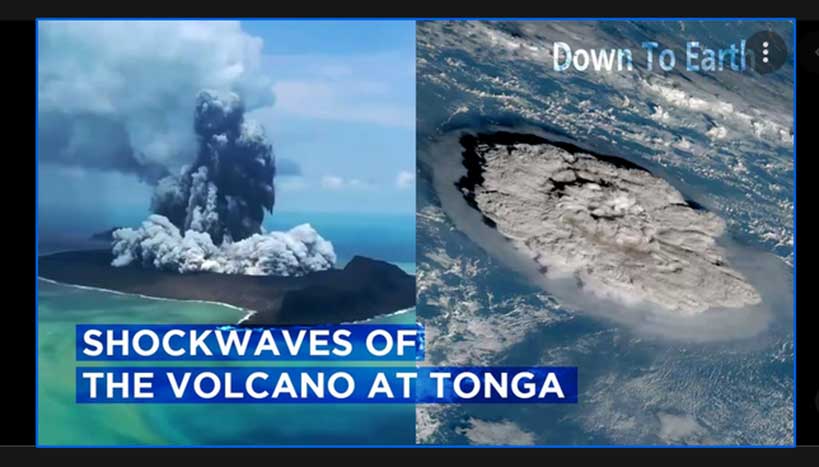 “I heard the sounds,” said co-author David Fee at the University of Alaska Fairbanks Geophysical Institute. “But at the time definitely did not think it was from a volcanic eruption in the South Pacific.”

Robin Matoza, an associate professor of Earth Science at the University of California in Santa Barbara, said the Hunga-Tonga volcanic sounds heard far away in Alaska may have been “generated somewhere along the path by non-linear effects.” Matza led a team of 76 scientists from 17 countries to study the scale and dynamics of the Tonga volcano.

Before this year’s event, the deadliest and most destructive volcanic event in the human record was the 1883 Krakatoa eruption in Indonesia. But the Krakatoa volcano booms were heard 4,800 kilometers (2,980 miles) away and generated similar pressure waves as observed in the Tonga case. The Tonga volcano has been found to be 10 times bigger than the explosion of the 1980 Mount St. Helen’s in Washington and much bigger than the 1991 Mount Pinatubo eruption in the Philippines.

The Tonga eruption produced very strong low-frequency atmospheric pressure waves (popularly known as Lamb waves) in a way that had never been observed with volcanic eruptions before. It also generated massive atmospheric waves that produced moderate tsunamis from the Atlantic to the Pacific Oceans in ways that geophysicists had never known before.

“And by studying this remarkable dataset we will better understand acoustic and atmospheric wave generation, propagation, and recording,” said Fee. “This has implications for monitoring nuclear explosions, volcanoes, earthquakes, and a variety of other phenomena. Our hope is that we will be better able to monitor volcanic eruptions and tsunamis by understanding the atmospheric waves from this eruption.”

Scientists said the Lamb waves seen with the Tonga eruption circled the Earth four times in one direction and then changed course in the opposite direction three times. A senior geophysicist at the seismology and acoustics department at the Royal Netherlands Meteorological Institute, Jelle Assink, explained that Lamb waves are extremely rare and often associated with large air volume displacements which usually develop along the Earth’s surface.

“Lamb waves are rare,” Fee stated. “We have very few high-quality observations of them. By understanding the Lamb wave, we can better understand the source and eruption. It is linked to the tsunami and volcanic plume generation, and is also likely related to the higher-frequency infrasound and acoustic waves from the eruption.”

NASA also reported that the Tonga event created considerable disturbances in space, according to data recorded by its Ionospheric Connection Explorer (ICON) and ESA’s Swarm satellites. Brian Harding, a physicist at UC Berkeley, said “the volcano created one of the largest disturbances in space we’ve seen in the modern era.”