Teams and players across the German Bundesliga are keeping fit and active as the division prepares for a tight end to the season. In recent years, it’s been something of a procession at the top of the table with the nation’s most successful club leading the way. 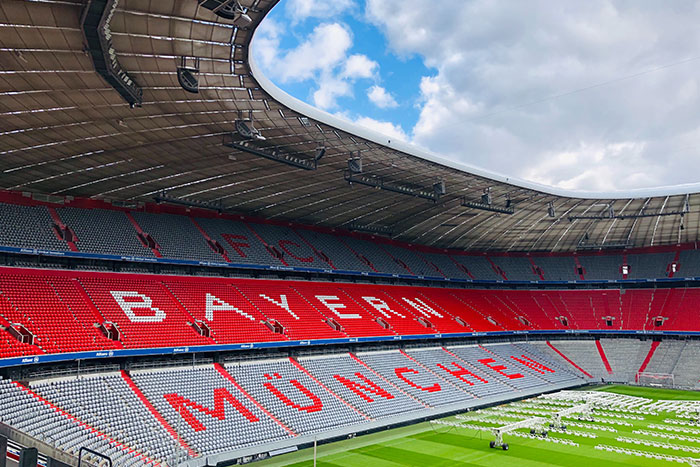 We could have a similar situation at the end of 2019/20, and while the table appears to be tight, one side, in particular, will take pole position as they look to close out the campaign.

Multiple champions Bayern Munich will resume with a four-point lead over the chasing pack, but with nine games left to play, the lead is far from insurmountable.

Picking up the Pace

Bayern Munich is the defending Bundesliga champions, and the club is aiming to secure their eighth successive title. That lead is more than useful, and Hans-Dieter Flick’s side has the momentum after a relatively slow start to the campaign.

If the form can be taken into account at this stage of the campaign, the stats are with Bayern once again as Flick’s men have won five and drawn one of their last six outings. The titleholders also possess the leading scorer in the division with the prolific Polish striker Robert Lewandowski finding the net 25 times to date and recording a ratio better than a goal a game in the process.

Hope for the Chasing Clubs?

When markets open for Germany’s top flight, Bayern will evidently be odds-on favorites in the Bundesliga betting markets to retain their title. All of the statistics appear to be in their favor, but the chasing teams will remain hopeful of upsetting the pundits’ predictions.

Moving through the table, Borussia Dortmund are the closest challengers to the leaders and Lucien Favre’s team will have one big opportunity to narrow the four-point gap. Bayern has yet to travel to the Westfalenstadion and the game between the top two could decide the fate of this season’s Bundesliga title.

Behind Dortmund, RB Leipzig is just a point further back and the side will be buoyant after reaching the quarter-finals of the Champions League for the first time in their history. In fourth place, one point behind Leipzig is Borussia Monchengladbach but from fourth onwards, it’s really just down to a battle as to who claims the Champions League slots.

Coming back to the title race, it’s very much advantage Bayern Munich as football makes its first, tentative steps back into competitive play but clearly the campaign isn’t over just yet.

While the markets may not necessarily agree, there is still a lot to play for as far as the Bundesliga is concerned. Bayern has not always been dominant in this campaign and a 1-1 draw against RB Leipzig earlier in the season suggests that they can drop points against the teams around them.

Time will provide an answer but at the very least, top-flight football in Germany is far more competitive in the present day, and neutral supporters will hope that the situation is set to continue.