The lower legislative arm of government in Argentina on Friday passed a bill that will decriminalize abortion of fetuses that are 14 weeks old or less. The bill was proposed by the president of the country, Alberto Fernández, to appease demonstrators that have been advocating that women should be free to abort without fear of being prosecuted by law. 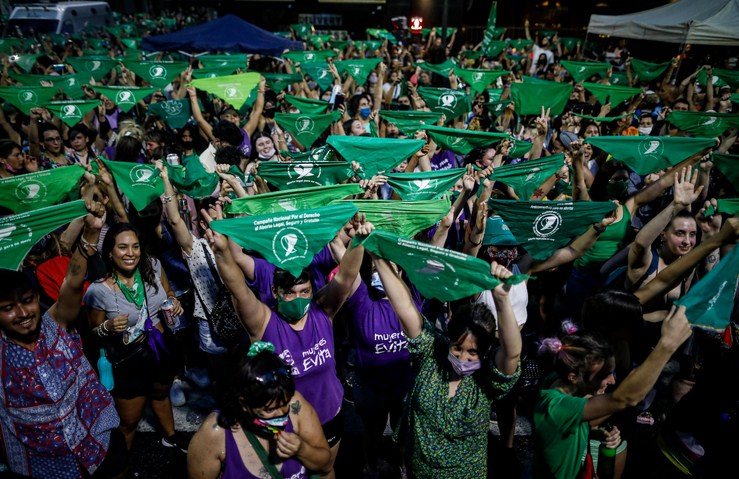 The bill still has to overcome the hurdle posed by the 72 members of the Senate which previously turned down a similar bill after it passed in the lower house. The Upper House is expected to sit before the year ends to debate the bill. About 131 of the lawmakers in the Chamber of Deputies voted in support of the bill while 117 voted against it, with 6 absent.

The Speaker of the House, Sergio Massa, read the decision of the lawmakers as the women rights activists cheered loudly outside the congress building. The demonstrators slept in front of the building on Thursday waiting for the results of the debates which started on Thursday and went on into the early hours of Friday. The demonstrators, decked in their symbolic color green, hugged and cheered after the lawmakers’ verdict was announced, NPR reports.

About 100 yards away from the happy demonstrators, hundreds of residents who opposed the bill were saddened by the announcement. Carrying the country’s flag and wearing their symbolic color of light blue, some of these sets of demonstrators cried when Massa read the results of the votes.

In Argentina, women who have abortions and people who help them currently risk being prosecuted by the law. Abortions are only allowed in special cases such as rape or when the expectant mother’s health is at risk. Things will remain the same if the country’s Senate fails to approve the deal just like it did in 2018 under the country’s former President Mauricio Macri who is more conservative than Fernández.

Before the lawmakers started the debate on Thursday, the Roman Catholic Church urged the lawmakers to take a minute to reflect on the sanctity of life. The church expressed the stance of Pope Francis, who is from Argentina, on the issue. The pope has several times denounced abortion, describing it as a part of the present generation’s culture of discarding and failing to show respect to the weak, the elderly, and the unborn.

While campaigning, Fernández promised Argentine women rights advocates that he would push to make abortions easily accessible and legal in the country. He stated that yearly, nearly 38,000 women need urgent medical attention after undergoing an abortion in unsafe places and thousands have died in the past 40 years from botched procedures.

The Significance of Biomedical Sensors in the Modern World < Previous
Pest Control Tips: 5 Secrets to Bug Proof Your Home Like a Pro Next >