An ancient Triceratop that lived 67-65 million years ago during the Cretaceous period will be going on auction from September 16 to October 21 in Paris. Named “Big John,” the 60% complete dinosaur is expected to fetch $1.4 million to $1.8 million at the auction to be held by Binoche et Giquello. 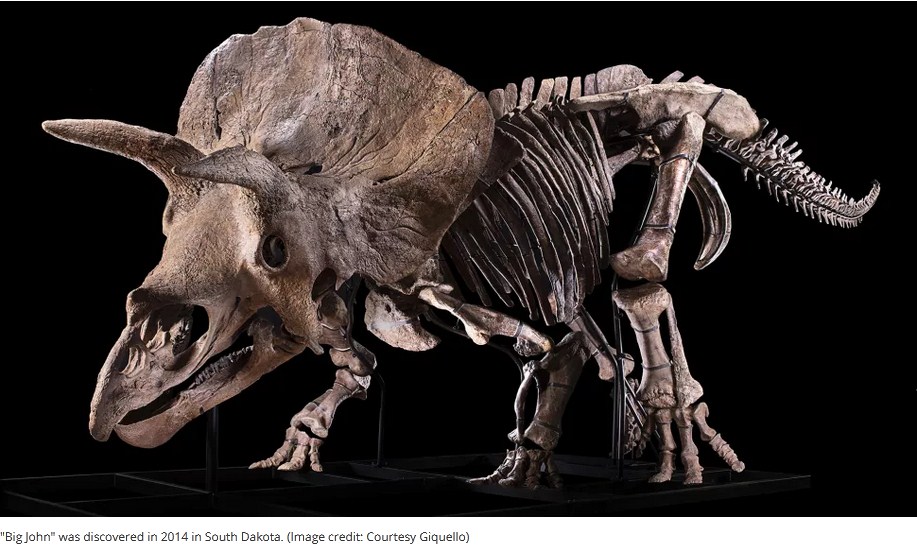 The French auction house will hold a public display for the giant dinosaur fossil from September 16 to October 15 at the Rue de Archives. It will then be moved to the Parisian auction house Hotel Drouot on October 18 and the auction will hold on October 21. The fossil will go to the highest bidder during the auction.

Big John was discovered by a geologist and paleontologist, Walter W. Stein, in 2014 and fully excavated in 2015 in South Dakota. Stein’s company PaleoAdventures unearthed the fossil from the Hell Creek Formation, a part of Montana, North Dakota, South Dakota, and Wyoming that was prone to ancient floods in prehistoric eras.

Big John is the largest triceratops fossil ever dug up by paleontologists. The skeleton measures nearly 26 feet (8 meters) long and its skull which is 75% complete measures 6.6 feet (2 meters) wide. It has two large horns which measured almost 4 feet (1.1 meters) long and about 1 foot (30 centimeters) at the base. This suggests the horns can take a full impact of about 16 tons (14.5 metric tons) in a battle.

Scientists said there is a gaping hole in the collarbone of the extinct animal, which suggested that it was involved in a fight with another triceratops. It must have been wounded by its rival during a battle for a mate or a claim for territory. The animal must have died in a flood since its bones were fully fossilized – a situation that could have been possible if it was fully covered in mud.

With the approaching auction, the Society of Vertebrate Paleontology (SVP) lamented that auctioning off the fossil will deprive scientists of the opportunity of carrying out extensive research on the ancient triceratops. They said the skeleton of the dinosaur will just disappear into some private vault and be lost to the public.

“Scientifically important vertebrate fossils are part of our collective natural heritage and deserve to be held in public trust,” the SVP stated.

Big John will not be the dinosaur skeleton to sell for the highest price yet. In October 2020, a 67-year-old T. rex known as Stan was auctioned off for $31.5 million, the highest price a fossil will ever fetch to date.

Bill Management: Tips for Paying on Time and Debts Prevention < Previous
More Than 50,000 People Evacuated From Afghanistan Will Be Resettled In the US Next >