The new Crown Prince of Saudi Arabia, Mohammed bin Salman, who as defense minister has led the country’s blockades and bombings of Yemen, donated $66.7 million to Yemen on Friday to fight the cholera outbreak that’s affecting people nationwide.

The donation authorized by the crown prince was announced by the royal family’s charity group, the King Salman Center for Relief and Humanitarian Aid, which noted that the donation would go to UNICEF and the World Health Organization to help Yemen.

The state-led Saudi news media said that the donation is an initiative of Crown Prince Mohammed bin Salman and that it accelerates the Kingdom’s substantial humanitarian efforts in Yemen.

Crown Prince –and defense minister– of Saudi Arabia donated $66.7 million to UNICEF and WHO

UNICEF released a statement saying that it welcomed the donation from the Saudi prince and that they look forward to discussing this contribution with the kingdom’s royal charity.

“W.H.O welcomes all offers of support that would alleviate the suffering of the Yemeni people,” said Tarik Jasarevic, a spokesman for the World Health Organization, according to the New York Times. “As with all funding we receive, these funds will be used in line with the humanitarian principles of neutrality, humanity, and independence.”

The donation was one of the first actions of the crown prince, the 31-year-old son of King Salman since he was promoted to first in the line of succession on Wednesday, setting aside his rival, Prince Mohammed bin Nayef, and overlooking decades of royal custom.

It is unclear whether the money is a direct donation from the fortune of the crown prince, who is extremely wealthy, just like other members of his royal family. However, $66.7 million would not be considered a substantial amount for the crown prince, who on one occasion spent $550 million to buy a yacht from a Russian vodka tycoon.

UNICEF and other humanitarian organizations have been expressing growing alarm about the swift spread of cholera in Yemen, the Arab world’s poorest country, in which the health system has collapsed because of the war. A coalition led by Saudi Arabia bombed the country two years ago after Yemen’s Houthi rebels took control of the capital and ousted the pro-Saudi government.

Yemen is facing the worst cholera outbreak in its history

The bombings, which the now Crown Prince Mohammed has overseen as defense minister, have made little progress. And the Saudis have faced growing criticism from human rights groups, which accuse them of indiscriminate bombings and sea and air blockades that have destroyed what’s left of Yemen’s economy and worsened the cholera outbreak in the country.

The UN Children’s Fund warned this week that cholera cases and deaths in Yemen continue to grow and could reach 300,000 by the end of August. UNICEF calculates that currently there are around 200,000 cases of cholera in the country, including 1,200 death, 300 of them being children. 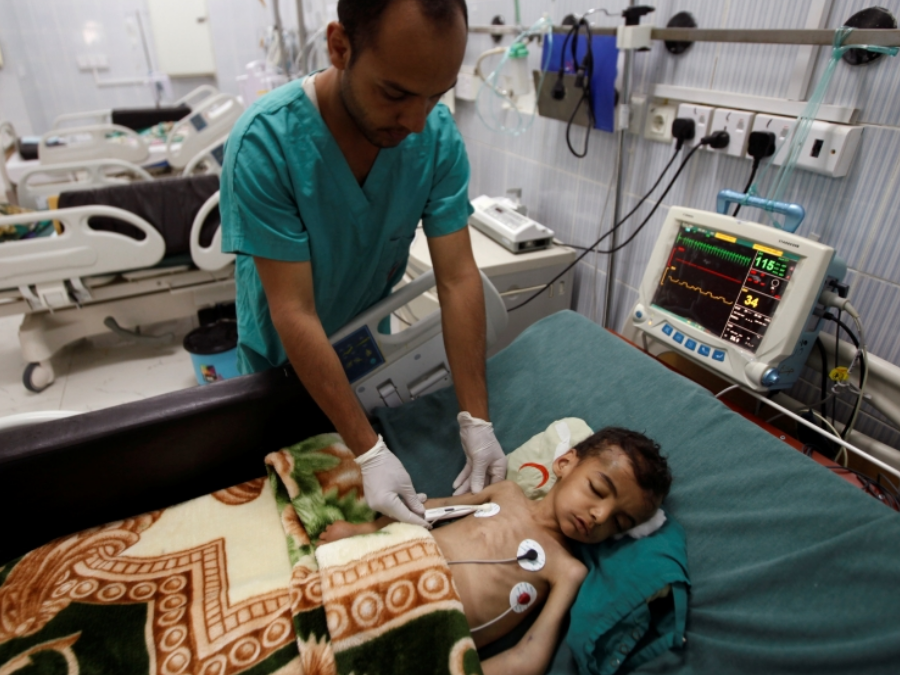 Currently, there are around 200,000 cases of cholera in the country, including 1,200 deaths – with a quarter of the being children. Image Credit: Al Jazeera

UNICEF has said containing the cholera outbreak in Yemen is very difficult. It noted that the country’s health system is near total collapse, water and sanitation systems are not kept clean, and the workers who are meant to care for patients, collect the garbage and maintain vital systems running have not received a paycheck in six months.

The UNICEF representative in the Arab country, Meritxell Relano, said that despite the many obstacles, aid agencies are managing to reduce cholera cases and deaths in many parts of Yemen. She noted that UNICEF and other partners are meeting with some success in preventing the outbreak from spreading in places where they’ve provided families and communities with a package of intervention. These packages include household water purification.

According to Relano, it is important to know how to care for a patient with cholera because the fluids of an infected person sometimes transmit the disease. Contaminated water or food cause cholera and it’s early diagnosis and treatment can cure it quickly. However, it can kill a person in few hours if it’s left untreated.

“A team of people, they go house by house and they check the water sources that the family is using,” said Relano, according to VOA News. “They chlorinate the water tanks if they have a water tank… and then they are informed about the ways to avoid cholera by providing good hygiene to the family – hand washing with soap, how to handle the food and how to handle a family that is sick with cholera or with diarrhea.”

The Middle East regional director for UNICEF, Geert Cappelaere, said last week that the organization had been so desperate to contain the cholera outbreak in Yemen that it had decided to pay the country’s doctors and nurses, who have not been paid in months.

Cappelaere noted it was the worst cholera outbreak he had seen in Yemen, and that “just comes on top of what already was an incredibly daunting situation.” The country is also facing a famine and a growing population of children with severe malnutrition problems.