A study published in the journal Current Biology has analyzed how woodpeckers are able to drill into trees without injuring their beaks or sustaining brain damage. A biomechanics researcher from the University of Antwerp in Belgium, Sam Van Wassenbergh, said several beliefs about woodpeckers’ pecking activities are untrue. 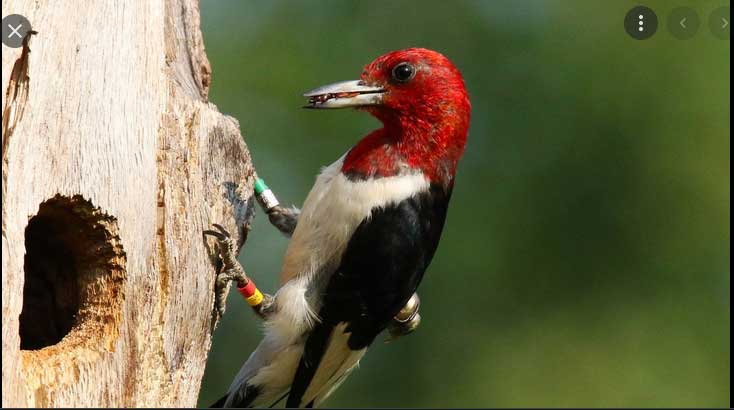 The researchers said woodpeckers do not absorb shocks to their beaks or brains while pecking into a tree – even though humans would suffer concussions if they banged their heads against trees the way the birds do. The reason for this is that the brain of woodpeckers is infinitesimally smaller than those of humans.

The study authors used high-speed videos to analyze the pecking activities of three species of woodpeckers and measured the extent of deceleration that occurred in their eyes when they pecked on wood. They tracked points on the beaks and eyes of the birds to determine if the brains of the birds or any other cranial structure absorbed the shocks when the birds smash into trees.

The researchers found that woodpeckers can peck against a tree at an amazing speed of 20 times a second, and some species can take in forces of up to 1400g. But if a human being gets exposed to 90-100g, they will suffer a brain concussion. “By analyzing high-speed videos of three species of woodpeckers, we found that woodpeckers do not absorb the shock of the impact with the tree,” Wassenberg said.

They found that the birds are able to withstand terrific blow traumas because they have strong neck muscles and spongy, shock-absorbent bones. These make the woodpeckers’ heads accelerate and decelerate at amazing speeds. They also discovered that the beak and skull do not take in pecking force as people thought, “If the beak absorbed much of its own impact the unfortunate bird would have to pound even harder,” they said.

“The absence of shock absorption does not mean their brains are in danger during the seemingly violent impacts,” said Van Wassenbergh. “Even the strongest shocks from the over 100 pecks that were analyzed should still be safe for the woodpeckers’ brains, as our calculations showed brain loading that is lower than that of humans suffering a concussion.”