Mars is no longer better mapped than Alaska. The “most accurate digital elevation maps” ever created of the state have been released by The White House, the National Science Foundation, and the National Geospatial-Intelligence Agency (NGA), according to a statement the government delivered Thursday.

Paul Morin, head of the University of Minnesota’s Polar Geospatial Center, said the United States is the only country that could have come up with such a “game-changing” data set, as reported by National Geographic. The newly released maps will help identify the rapid changes that are taking place in the topography of Alaska as a consequence of a warming climate.

The project has been named Arctic DEM and although it is being released with Alaska, it will cover 100 percent of the Arctic above 60º north latitude, meaning that Canada, Russia, and other Arctic countries will also by covered by the end of 2017. This will be possible thanks to a supercomputer in Illinois that will crunch all the satellite data.

Because the reaches of the Arctic are too big, it would be unaffordable to collect maps the way it is done with the lower 48 states of the U.S., where radar from low-flying aircraft collects most elevation data for topographic maps, as explained in the NatGeo article. Above the 60th parallel, there are about eight million square miles of remote wilderness that are too expensive to map with regular methods.

DigitalGlobe operates commercial satellites programmed to orbit the poles every hour and then release data for the new maps. The latest satellites have built-in, high-resolution cameras capable of detecting the smallest details in Alaska. In fact, researchers have been able to count emperor penguins thanks to these state-of-the-art satellites.

Morin explained that stereoscopic images of the same location are taken 45 seconds apart, which allows researchers to get the extremely accurate elevation maps. The National Science Foundation has received such imagery of the polar regions from the NGA for the last six years. NGA’s Brian Bates said the resulting maps have helped scientists find safe landing places for airplanes, as well as safe travel routes for snowcats, as reported by NatGeo. 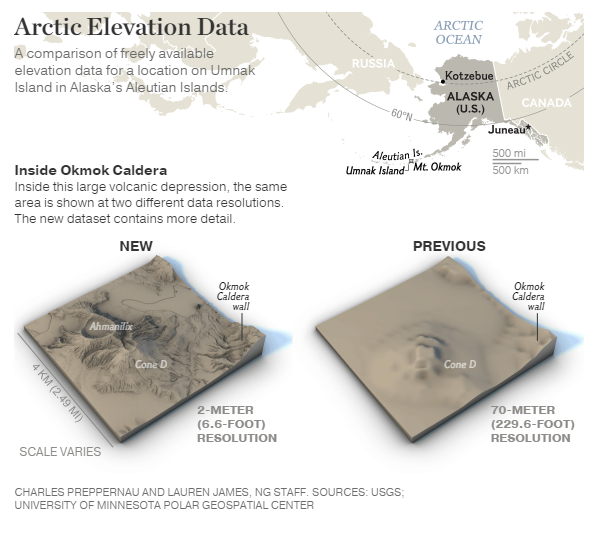 Everyone who works with the Earth’s surface has been dreaming of these data set, including biologists, geologists, geographers and many other scientists. Morin pointed out that the Arctic DEM is changing the way science will be done in the remote Arctic, according to NatGeo.

Additionally, Bates highlighted the fact that the DEMs serve as extremely useful planning tools for indigenous folks who are constantly struggling to keep their communities safe. He added that accurate topographic data are key to build new seawalls, roads, and airstrips.

Noah Naylor of Kotzebue is the planning director for Northwest Borough. The new maps could allow him to plan the future of his people by monitoring the threat. He told NatGeo he was eager to see the results. Kotzebue is located on a gravel peninsula about ten feet above the Chukchi Sea, which is the source of an increasing destruction.

For their part, folks in Shishmaref voted last week to relocate their flood-prone village, where they have been living for over four centuries. As much as 31 Alaskan villages are under threat of destruction caused by flooding and erosion, according to a study published in July 2015 by the nonprofit Arctic Institute.

During a visit to the small town located on Alaska’s northwest coast, President Barack Obama became the first sitting president to stand on the Arctic Circle. He committed to launching additional efforts to work on geospatial mapping as part of his Executive Order.

“When the White House called for proposals last year to help people in the Arctic with climate resiliency, we thought this is something we can do efficiently and economically,” Bates said, as quoted by NatGeo.