Qualcomm, the world’s biggest designer of wireless telecommunication products and services has recently announced it is creating a new Snapdragon platform, a gigabit-class LTE modem for mobile devices.

The Snapdragon X16 LTE Modem is made using the 14nm processor and according to the company, it will enable live streaming of 360-degree virtual reality content. This is the first chip for both major types of unlicensed LTE the company has ever created, and it has features that will help phones take advantage of more frequency bands. 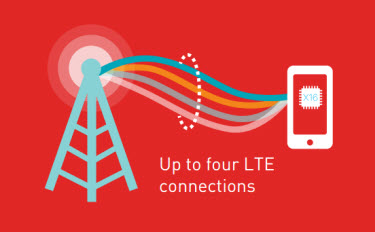 The last version of the Snapdragon, the X12 is the current fastest modem from Qualcomm which runs at 600Mbps. However, the new version, the X16, will overpower the current one by running at 1Gbps.

The X16 is faster because it can get more performance out of the same amount of spectrum, plus make several radio channels look like one big, fat band. Carriers are already stitching together as many as three standard 20MHz blocks of licensed spectrum into a virtual 60GHz band, as published at an article on PCWorld.

Also, with the X16, Qualcomm will also give device manufacturers a way to add more antennas and feed bits through them over more streams to a base station, which will be another option to get more speed out of LTE.

According to Qualcomm, The new modem could change the way people use phones. They say users could stream a concert to their phones over LTE almost anywhere in the world in virtual reality. All their files could be in the cloud and still pop up like they were in the phone’s storage.

First commercial products with the new Snapdragon modem will be available in the second half of this year.