Home » Headlines » World » Pope Emeritus Benedict XVI Dies at 95 at a Monastery, to be Buried on Jan. 5

Pope Emeritus Benedict XVI Dies at 95 at a Monastery, to be Buried on Jan. 5

Pope Emeritus Benedict XVI is dead. The retired pope died on Saturday at the Mater Ecclesiae Monastery in the Vatican at the age of 95. He is scheduled for burial on Thursday, January 5, 2023. Formerly Cardinal Joseph A. Ratzinger, the deceased pope took on the name of Benedict XVI after he became a pope on April 19, 2005, the Washington Post reports. 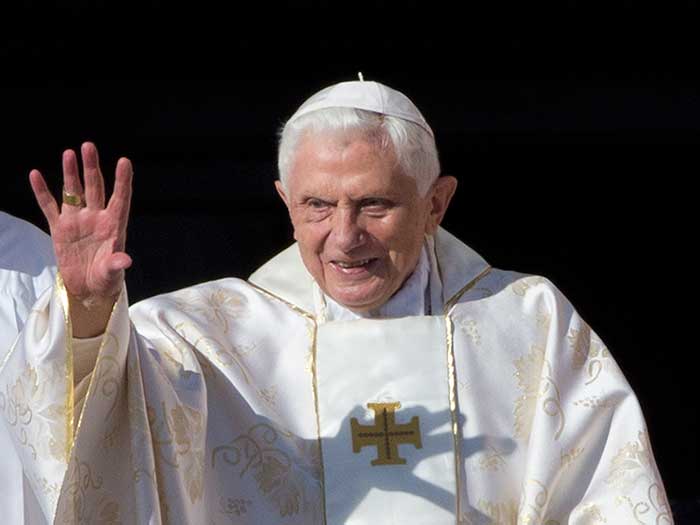 He was a German theologian who headed the Congregation for the Doctrine of the Faith in the Vatican, a powerful position that was second to the pope before he assumed office years later. Benedict became a pope at the age of 78, the oldest individual to become a pope at that advanced age since the papacy of Clement XII in 1730.

Benedict, Cardinal Ratzinger, suffered a hemorrhagic stroke in 1991 and the illness affected his sight for some time. He suffered another stroke between 2003 and 2005, and also suffered a heart condition that made him rely on strong medications for his well-being. Then, during a visit to the Alps in 2009, he fell and broke his right wrist and had to be hospitalized for some time.

During a public speech on February 11, 2013, Pope Benedict suddenly announced that he would be stepping down as pope due to ill health. He explained in Latin that his failing health could no longer bear the rigors of his office and that someone much stronger and younger would be fit for the role. At age 85, Benedict announced that he did not have the physical and mental fortitude to lead the more than 1.1 billion Catholics around the world.

“In order to govern the bark of Saint Peter and proclaim the Gospel, both strengths of mind and body are necessary,” he said in his announcement, “strength which in the last few months has deteriorated in me to the extent that I have had to recognize my incapacity to adequately fulfill the ministry entrusted to me.”

According to him, he had “repeatedly examined my conscience before God” and concluded that the modern world, “subject to so many rapid changes and shaken by questions of deep relevance for the life of faith,” required a pope in better physical and intellectual condition. “My strengths, due to an advanced age, are no longer suited” to the papacy, he said.

The Vatican was perplexed at this development, even though Benedict was the first pope to resign in the last 600 years. Since two popes would be alive at the same time – something that had not happened for 600 years, the Vatican council coined the term “pope emeritus” to distinguish Benedict from Archbishop Jorge Mario Bergoglio, the Argentine Jesuit who succeeded him as pope on March 13, 2013, and took on the name of Pope Francis.