The Directorate of Fisheries in Norway has been forced to euthanize a massive walrus weighing 1,300 pounds because it kept attracting huge crowds. The authorities warned people to keep their distance from the overweight young female walrus, but people kept coming close to her with their children in tow to take photos, a situation that the government considered dangerous. 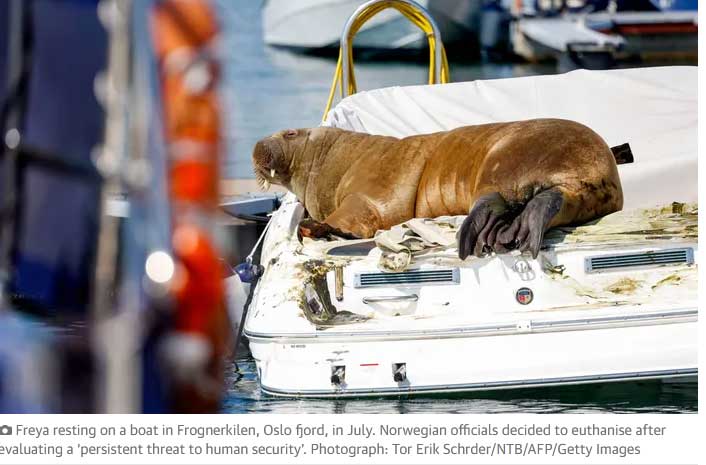 “We will have to look at other options than the current strategy of asking people to stay clear of the wild animal,” said Nadia Jdaini, spokeswoman for the Norwegian Directorate of Fisheries. “One of those options, as previously stated by the Directorate from the beginning of this summer, is to greenlight a controlled operation to put the animal down.”

While the authorities considered relocating the stray marine beast to distant waters, the logistics of doing so were huge. They knew the walrus, named Freya after the Norse goddess of beauty and love, might eventually leave the Oslo fjords and return to the icy waters of Canada, Greenland, and Russia where they reside in larger populations. But Freya refused to leave Norway since she came in on July 17 when she was first spotted.

The head of fisheries in the country, Frank Bakke-Jensen, said people disobediently swam close to the animal and even took pictures with it while also throwing food at it. The walrus sometimes lumbered up a boat to sunbathe for hours, with the boats buckling under its heavy weight. Bakke-Jensen said the fisheries directorate was left with no option but to kill the animal to safeguard the safety of people.

“The decision to euthanize was taken on the basis of a global evaluation of the persistent threat to human security,” Bakke-Jensen said in a statement. “We carefully examined all the possible solutions. We concluded that we could not guarantee the wellbeing of the animal by any of the means available.”

Rune Aae, who teaches biology at the University of South-Eastern Norway and manages a Google map of Freya sightings, said Freya had been sighted in the UK, the Netherlands, Denmark, and Sweden before coming to spend part of the summer in Norway. Walruses usually feed on mollusks, shrimps, crabs, and small fish among other invertebrates. It is a protected species in Norway and had been documented chasing a duck, attacking a swan, and inching up to people for fun.

“Normally, walruses will show up on some islands, but they will leave quite soon because they’re afraid of people,” said Aae. “Actually, I think she likes people. So that’s why she’s not leaving. Killing her is an easy way out,” said Aae. “Maybe the mood has changed in the public opinion about her.”

WHO Asks the Public to Suggest a New Name for Monkeypox < Previous
The Main Benefits of Custom Reporting vs. Standard Reports Next >
Social Connection
Latest News