The fashion house Svaha has launched a new dress bearing the clearest photos of distant galaxies captured by the James Webb Space Telescope (JWST). The image imposed on the dress was taken by JWST and released by NASA on July 11, 2022, and named Webb’s First Deep Field. With Svaha’s new dress sense featuring the image of deep space, space enthusiasts can carry the image on their bodies in a marriage of fashion and science. 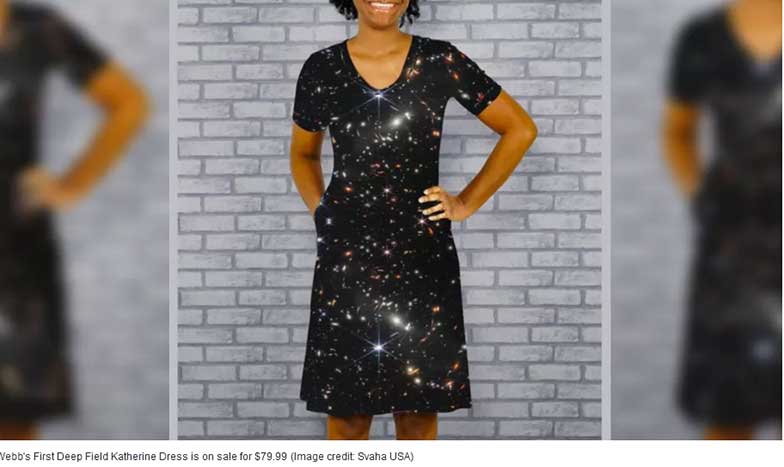 Svaha’s founder and CEO, Jaya Iyer, said customers requested to have the dress design made after NASA released the JWST images. So the fashion house made a collection of space-themed clothing in the form of a dress, top, and cardigan; the dress can be pre-ordered for $79.99 with the top and cardigan costing $44.99 each. The clothes range in sizes from XS to 5XL and customers who pre-order will have them shipped before September 2022.

“As soon as NASA released the photo, our social media was flooded with requests from our customers to capture the image on a dress,” Iyer said. “The image is just so beautiful; we just had to do it! So, we created these beautiful designs so that people can wear them and own a piece of history!”

Made of 95% cotton and 5% lycra, the JWST-themed dress is knee-long, has short sleeves, flared skirt with pockets sewn into the waist. The image of distant galaxies can be seen clearly by people on the wearer, and the wearer can also see it perfectly by looking down on herself. Iyer said the objective of the fashion dress is to give people feminine clothing with science themes in a clothing collection that advances knowledge of deep space.

The JWST was launched in December 2021 and equipped with a Near-Infrared Camera (NIRCam) and able to capture distant objects in space more clearly. It is the predecessor to the Hubble Space Telescope, which had a significantly limited spectrum of infrared wavelengths. The full-color infrared First Deep Field photo on the Svaha dress captured the SMACS 0723 galaxy cluster, which scientists have been trying to study for a long time.

Elon Musk Files 164-Page Countersuit against Twitter As Judge Sets 5-Day Trial < Previous
Rental Property Value Calculator: What Is It And How It Works Next >
Social Connection
Latest News