A hostage situation took place in a restaurant in Dhaka, Bangladesh, today around 1.40 am local time, where a group of armed men took control over the restaurant and started shooting and attacking visitors in different ways. The group also exchanged fire with authorities. The Army got involved to rescue the hostages and neutralize the armed group, goal achieved about 13 hours later.

In the 10-hour siege, 14 hostages were rescued, but 20 others died as a result of the attack. Most victims were foreign. Allegedly, they were stabbed by the group before the arrival of security forces. The group was heavily armed since they even attacked the police with grenades. 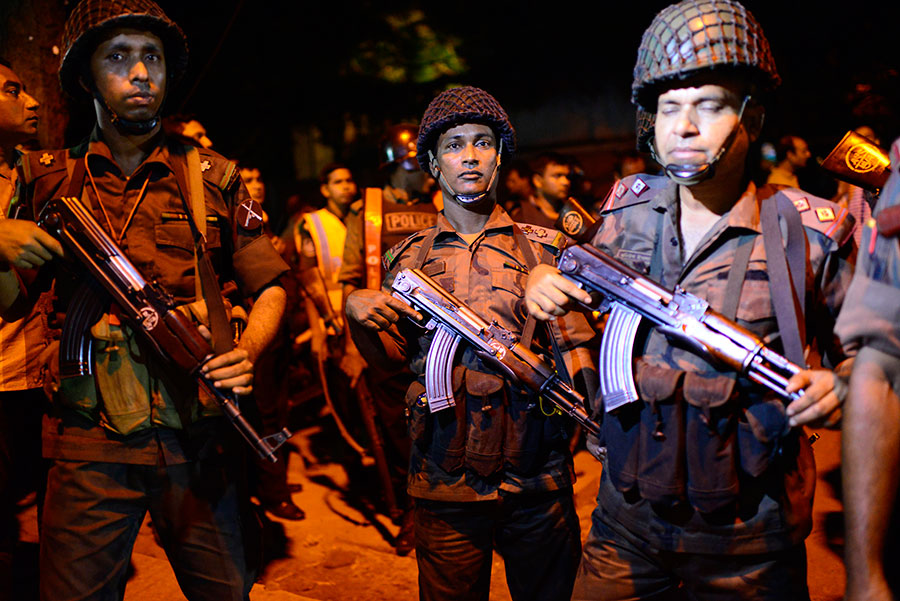 Authorities managed to neutralize six subjects, but around 20 people ended injured and are currently receiving treatment and medical attention in hospitals in the area.

Dhaka is one of the most popular cities in Bangladesh since it has a political relevance. It is considered the center of diplomatic activity and there are a considerable number of foreigns living in the area.

The Islamic State group stated that the attack targeted citizens of “Crusader countries” through Telegram, the messaging service used by supporters of the jihadist group, as reported by The New York Times.

Although Bangladesh authorities have not released any details about the operation and the investigation into the attack, the SITE Intelligence Group confirmed that ISIS was involved with the attack. The group of men were part of a jihadist cell and received weapons from the organization. SITE is an experts’ platform that monitors jihadist activity.

Witness: At least one injured person was removed from #Bangladesh cafe where hostages taken https://t.co/2MygIV3AJt pic.twitter.com/Xlz5RQRrhb

A U.S. citizen was among the hostages killed in the attack, as informed by The White House, although the identity has not been published.  Nine victims were italian, one of them was from India and other 7 hostages killed were Japanese, as reported by authorities from each of those countries.  Two victims were from the United Kingdom and it was the Emory University, where both victims attended, who released the news. There was also young student from Dhaka.

Some victims were in the city due to work and educational projects, while others were visiting friends and family.

The American government said through the spokeman Josh Earnest that the attack was a despicable act of terrorism, so international community should respond and confront these situations considering that the U.S. offered its assistance in the investigation.

Pope Francis also condemned the attack. The Vatican sent a condolence message this Saturday, stating that the violence perpetrated against innocent victims was an offense against God and humanity.

The Italian government was one of the first offices that responded to the attack. Since a considerable number of casualties were italian, authorities shared their condolences, and shared some details about the victims, although they will not reveal the identities until families are officially notified. The government sent an airplane to Bangladesh to respond to the situation directly in Dhaka.

A misinformation issue took place when an anonymous Indian government official said that some victims were South Koreans, but authorities in South Korea lately stated that the information was false, and there was no South Koreans among the victims.