Laurie Leshin has been appointed the first female director of NASA’s Jet Propulsion Laboratory (JPL), and her appointment takes effect in May. A geochemist and space scientist, Leshin will not only serve as the new director at JPL, but she will also serve as vice-president of the California Institute of Technology (Caltech), both located in Pasadena, California. 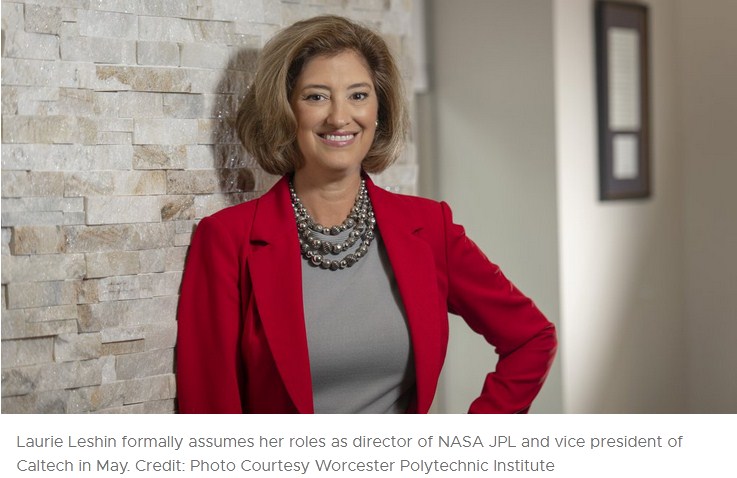 Caltech was established in 1892 and students as well as faculty from the institute established JPL in 1936; they have also been managing the lab on NASA’s behalf since 1958. Leshin will be taking over the management of JPL from Michael Watkins, who will pursue academic research at Caltech starting from August.

Leshin obtained her master’s and doctorate degrees in geochemistry from Caltech. She is the president of Worcester Polytechnic Institute since 2014 –one of the oldest private STEM universities in the United States. In 2005, she was the director of science and exploration at NASA’s Goddard Space Flight Center and later became the deputy director for science and technology in 2008 – a position that enabled her to manage more than 50 space and earth projects.

“I look forward to my work with Caltech and NASA to ensure that JPL continues to drive innovation across the global space ecosystem,” Leshin said. “I am especially honored to be the first woman to hold the title of director of JPL. I know from personal experience that diverse teams make a greater impact, and I will work every day to ensure that JPL is a place where all belong and thrive. We will dare mighty things, together.”

In 2010, she was appointed the deputy associate administrator of the Exploration Systems Mission Directorate at NASA’s Washington headquarters. In 2004, President George W. Bush appointed her to serve on the Commission on Implementation of United States Space Exploration Policy, and President Barack Obama in 2013 put her on the advisory board of the Smithsonian Institution’s National Air and Space Museum.

Leshin received NASA’s Outstanding Leadership Medal and Distinguished Public Service Medal, and she equally received the Distinguished Alumni Award from Caltech. She has an asteroid named in her favor by the International Astronomical Union – the asteroid 4922 Leshin, and she got the Meteoritical Society’s Nier Prize for her research on meteors.

“In this new era of groundbreaking discoveries and constant innovation, it is clear that Dr. Laurie Leshin has a track record of scholarship and leadership needed to serve as director of JPL and cement the center’s status as a global leader in the 21st century,” said NASA Administrator Bill Nelson.

“Under Dr. Leshin, the technology invented at JPL will continue to allow humans to explore the places in our universe that we cannot yet reach and spark the imaginations of future mathematicians, engineers, and pioneers in classrooms across America,” Nelson stated.