Manufactured by Abbott Laboratories, the heart stent, which is called Absorb, is seen by cardiologists as a meaningful advance for the treatment of the coronary artery disease. According to the Centers for Disease Control and Prevention (CDC), this heart disease is the most common cause of death in the United States.

The stent, which its full name is Absorb GT1 Bioresorbable Vascular Scaffold System (BVS), works like the traditional metal stents, opening a blockage in a coronary artery. The difference lies in the fact that Abbott’s stent is made of an absorbable biodegradable polymer, which fully dissolves two or three years after it is implanted.

The artery can go back to its regular shape thanks to the absorbing process.

“It allows the vessel to grow,” said Gregg Stone, cardiovascular researcher and leader of the study sponsored by Abbott, according to Wall Street Journal.

Absorb opens the blockage and limits the growth of scar tissue by using the drug everolimus, the FDA mentioned in a press release. 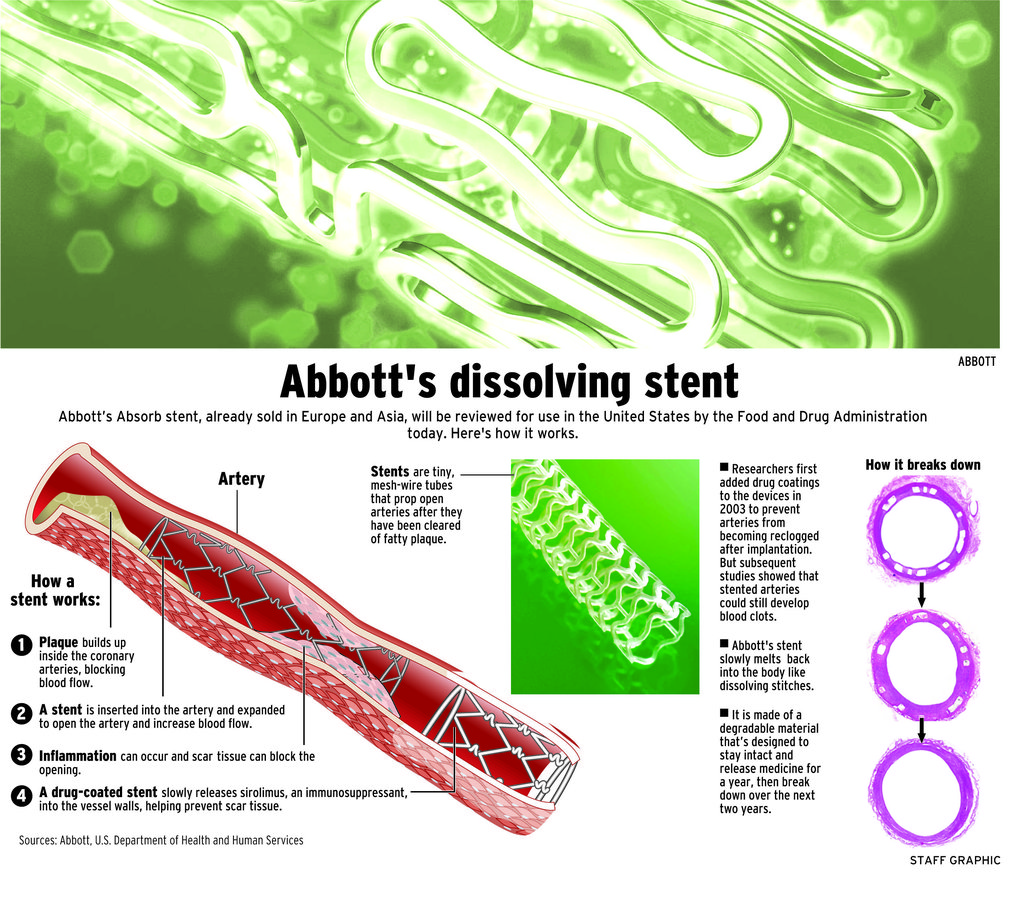 One of the main problems with metal stents is that they allow the forming of scar tissue within the device, causing a condition called thrombosis, which can generate blood clots and block the artery. But since 2003, drug-coated metal stents were approved by the FDA and became the most popular treatment for coronary artery disease. The drug would prevent the growth of scar tissue and the consequent blood clots.

However, recent researches show that the drug-coated metal stents could lead to heart attacks and even death – from 2 percent to 3 percent each year. An absorbable stent would prevent, or at least reduce, those events. The research carried to get the FDA’s approval for the Absorb GT1 BVS suggested that although it is a dissolvable device, the risk of clots is still present for some users.

Researchers analyzed the data and found that patients with arteries of less than 2.5 millimeters in diameter were the most affected. Absorb is thicker than most metal stents, so patients with smaller arteries are the most vulnerable to a resultant clot. Nevertheless, rates of stent thrombosis were almost the same for both devices.

Abbott said that it will lead a careful launch of the device while reaching a definitive solution, according to Wall Street Journal.

“We’re going to roll this out commercially in a phased way, starting with the sites that have had experience with our clinical trials and proceeding from there,” said Charles Simonton, chief medical officer for Abbott’s vascular business, according to Wall Street Journal.

Abbott shared on its official website that 150,000 patients have already been treated with the Absorb GT1 BVS, with more than 30,000 patients under observation of their progress. The device is available in more than 100 countries.