ESPN cuts relations with Curt Schilling for his inappropriate behavior

On recent days, the very well-known journalist Curt Schilling has been the subject of rejection by his own community and ESPN. This was caused by an offensive social media post against the transgender community shared by him through Facebook.

Schilling is a famous baseball player who is credited with 19 launches on major league seasons and won three World Series titles. He had over a 20-year career and compiled a record of 216-146 while pitching for the Baltimore Orioles, the Houston Astros, the Philadelphia Phillies, the Arizona Diamondbacks and the Boston Red Sox.

Schilling’s Facebook publication was a meme that he shared with lunging supporters of the rights of transgender people regarding the use of the restrooms, in which he added a comment that said that “a man is a man no matter how they call themselves.”

As reported by USA Today, in a further message on his personal website, Schilling dismissed the public reaction and cataloged them as people “who are dying to be offended” so they can create a fake cause to follow.

He denied having published disparaging remarks and said he had only made a comment about the “basic functionality” of the restrooms for men and women.

This attitude led to his immediate dismissal of the television network ESPN. The network have stood out through a statement that it is an “inclusive company”.

“We have informed Curt Schilling that his behavior was unacceptable and therefore cut our contractual relationship with him,” added ESPN. 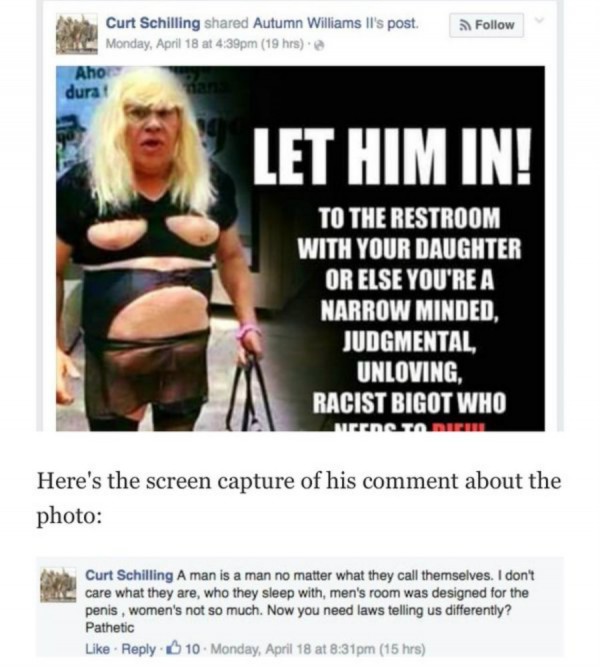 It is not the first time Schilling is involved in this kind of polemics. Recently he published a tweet where the Muslim community was compared with the Nazis, which led him to be suspended by the network during the MLB playoffs last season.

He also lashed out on a chance against presidential candidate Hillary Clinton, saying that she should be locked up in jail someday. 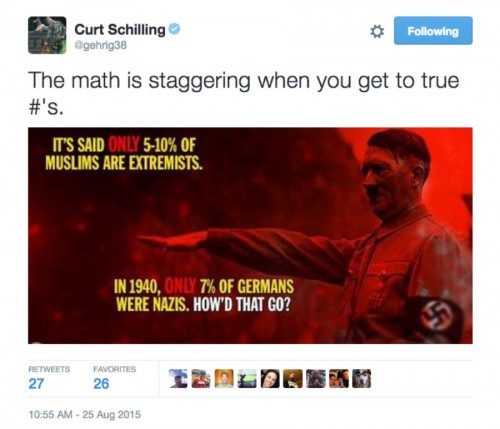