Following police warning that people should not approach or capture an escaped monkey in a Pennsylvania county, authorities said the monkey has been recaptured. The Pennsylvania State Police (PSP) on Friday announced that about 100 monkeys being transported in a trailer were involved in a crash after the truck in which they were being moved got hit by a dumpster. 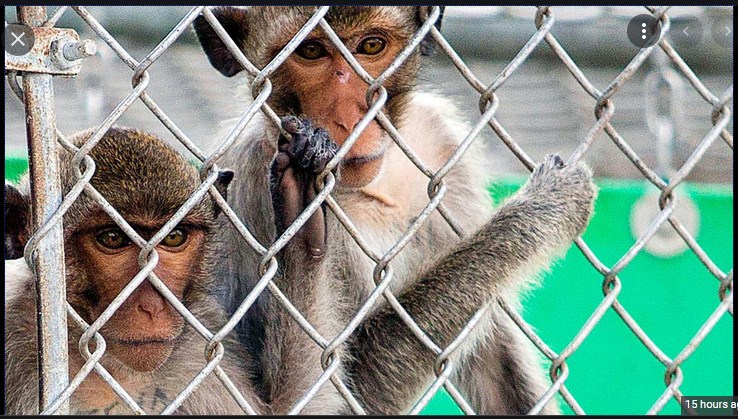 “We are asking that no one attempt to look for or capture the animal. Anyone who sees or locates the monkey is asked not to approach, attempt to catch or come in contact with the monkey. Please call 911 immediately,” the PSP had tweeted.

All the monkeys were captured except one on Saturday evening, but by evening the police said it had been recovered. “All monkeys have been accounted for,” they announced on social media.

The cynomolgus macaque monkeys were caged in crates loaded on a trailer. The trailer was hit by a dump truck in Montour County of Pennsylvania along the Interstate 80 exit and some of the animals escaped into the surrounding area.

Police and officials of the Pennsylvania Game Commission searched for the missing monkey for several hours in terribly cold weather, some of them holding rifles. The CDC provided technical assistance and firefighters from Valley Township deployed thermal imaging to locate the animal. One helicopter was also seen hovering overhead.

The CDC said the live monkeys were imported from Mauritius, and they arrived at New York’s Kennedy Airport on Friday morning. They were being moved to a CDC-approved quarantine facility before the accident occurred on SR 54 at I-80 near Danville.

The CDC did not reveal what experiments the monkeys were to be used for at the lab or the specific lab they were headed to. Scientists however revealed that cynomolgus monkeys are largely used in preclinical toxicology research and other medical studies.

An eyewitness who saw the crash, Michelle Fallon, said the driver of the trailer seemed disoriented after the crash and a passenger may have slight injuries. She said she was driving behind the trailer which veered off the road and tried to get back on it before a dump truck hit it from the passenger side, damaging the front panel and causing the crates of monkeys to crash onto the road.

Has Marriage Lost its Importance? The Popularity (and Decline) of Marriage in the United States < Previous
Space Force Launches Satellites That Spy Capabilities of Other Satellites in Orbit Next >
Social Connection
Latest News