Dinosaurs Were Initially Warm-Blooded, but Some Grew Cold-Blooded

Research published in the journal Nature suggests that dinosaurs were initially warm-blooded, but some of them later became cold-blooded. Paleontologists were able to come to this conclusion by analyzing the metabolic rates of the extinct animals – through chemicals in their bones that indicated how much they breathed in the last hour before their death. 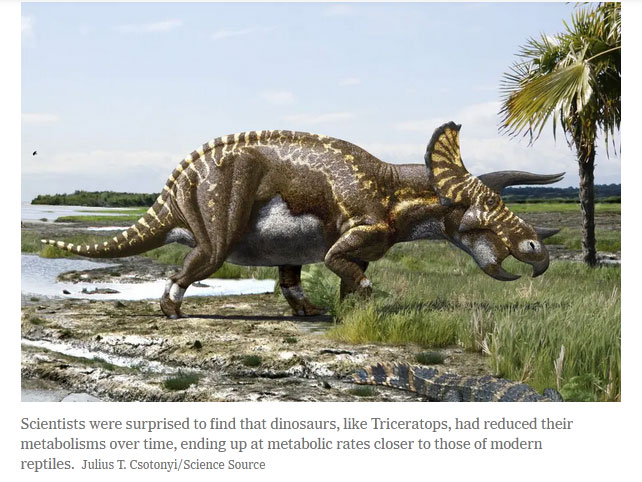 Scientists had always been anxious to know whether dinosaurs had warm or cold blood – like cattle and reptiles, respectively. But they had never come to a consensus and the debate had continued over the decades, said the leader of the research team and a postdoctoral researcher at the California Institute of Technology (Caltech), Jasmina Wiemann.

Wiemann created a technique that made it possible for researchers to evaluate the metabolism of dinosaurs. She disclosed that oxygen that is inhaled converts to chemical energy that fuels the human body and that of mammals. It is the metabolism that results from the oxygen use-up that enables people to keep in shape when they desire it.

Scientists said animals with warm blood exercise high metabolic rates and this is what makes them so active, while cold-blooded reptiles eat less and breathe less and so get less active; and they have to rely on the environment to get warm the way lizards bask in the sun. Researchers have however tried to know the metabolic rates of extinct animals such as dinosaurs by analyzing the chemical and osteohistology of their bones.

“It’s a really cool approach, and it was really revolutionary when it came out, and it continues to provide very exciting insights into the physiology of extinct animals,” Wiemann said. “But we’ve realized that we don’t really understand yet how fossilization processes change the isotope signals that we pick up, so it is hard to unambiguously compare the data from fossils to modern animals.”

But the research leader chose to determine the metabolism of the dinosaurs through the way they optimized oxygen. The process of breathing produces side products that react with proteins, sugars, and lipids in a manner that generates molecular waste as a byproduct. The waste is very stable and does not dissolve in water, and it remains forever preserved when animal bones fossilize. The preserved fossil reveals how much oxygen intake the animal had and the level of its metabolism.

“We are living in the sixth mass extinction, so it is important for us to understand how modern and extinct animals physiologically responded to previous climate change and environmental perturbations so that the past can inform biodiversity conservation in the present and inform our future actions,” Wiemann stated.