On Saturday night, the Minister of Interiors Nestor Reverol denounced that “violent groups” of Venezuelan protesters tore down the security fence of La Carlota’s military base. He stated that according to military justice, those who destroy structures of the armed forces must be jailed anywhere between 8 and 15 years.

The “siege” occurred on Saturday afternoon, on the 85th day of protests against the Maduro dictatorship, which has started to rely on the military to keep itself afloat.

The June 24th protest, 196 years after the Battle of Carabobo, was set at the military base to send a message to Venezuela’s armed forces and protest the killing of David Vallenilla. He died after an air force soldier shot him in the chest next to the security fence, becoming the first protester murdered by a Venezuelan soldier.

To date, there are 81 confirmed deaths during the protests set to oust the Maduro regime, 76 of which are recognized by the Public Ministry. Over half occurred due to firearms, and the rest came from the protests’ acts of repression.

Starting on April 1st, protests have intensified over the course of each week, arriving at a point of tension where the government has to rely on what remains of its tightly-gripped institutions.

One of the most surprising events was the retaliation of General Prosecutor Luisa Ortega Diaz, who was thought to be a firm Maduro supporter. Ortega condemned the killings during the protests and specifically pointed at National Guard officials, who use tear gas grenades as weaponized projectiles to knock protesters dead.

This is repeatedly denied by Reverol and Maduro, claiming that the National Guard is humane and respectful of human rights. The repression of protests has resulted in about 15,000 injured and 2,000 detentions.

According to Human Rights Watch, 275 detainees are processed using military justice, which is against human and civil rights. Protesters are jailed in maximum-security prisons, where they are tortured and isolated for hours during the day.

Maduro has control over most public institutions. The National Electoral Council is manipulated to promote the Constituent National Assembly and avoid any free elections, and the Supreme Court serves as a judicial trench to fend off any ruling issued by the General Prosecutor or the opposition. But any of these institutions or its officials may turn their back against Maduro, just as Ortega did, leading him to rely on the military to survive.

The president ratified Padrino-Lopez as the Minister of Defense, praising his duties and loyalty as a defender of the government; but he removed Benavides Torres as General Commander of the National Guard, a key position in the acts of repression against protesters.

According to opposition leader Henrique Capriles, Nestor Reverol has repeatedly gone over Benavides’ orders, and Maduro does not seem to mind. Also, the shooting of Vallenilla occurred after other high-ranking officials had ordered against the use of excessive force during the protests. Capriles assures that discontent is growing in the military, and that it is a matter of time until they part from Maduro as the cost of repression will eventually become too high to maintain.

The government will reach a breaking point

Both government and protesters await the day that the protests will come to an end. On the one hand, opposition leaders vowed not to leave the streets until they achieve a pivotal change in Venezuela, whether it is Maduro’s resignation, the announcing of general elections, or anticipated presidential elections which are supposed to take place in 2018.

In Maduro’s case, all comes down to whether he can punch through democracy and start the process to enact the Constituent National Assembly. The assembly will allow him to overhaul the republic and its laws, transforming Venezuela into a communist state by definition.

Elections will then be optional, and the socialist party will control practically everything. The armed forces will lose power, and all public institutions will answer only to the president’s orders. 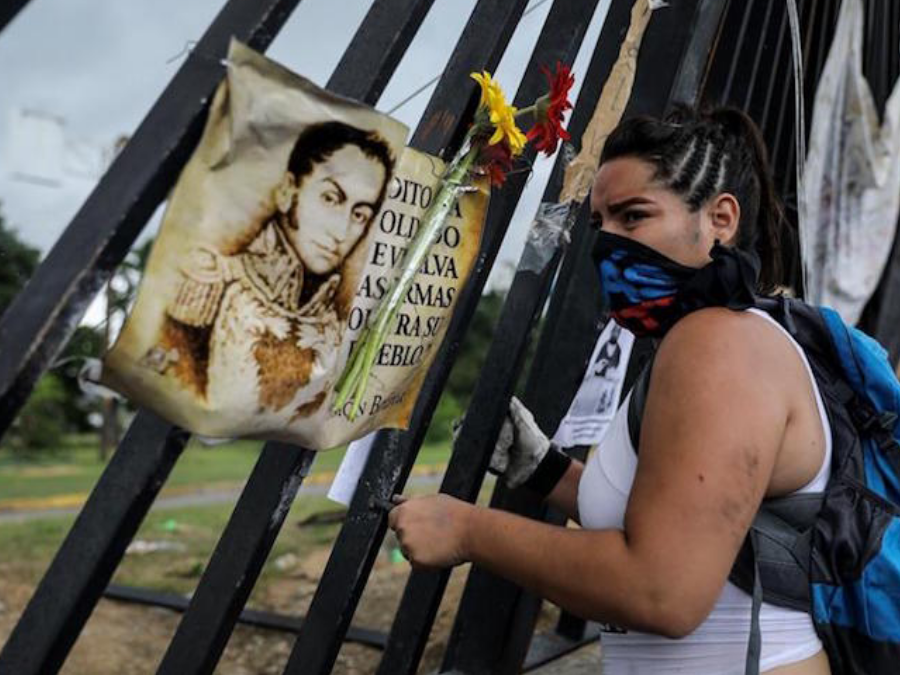 “Cursed be the soldier who aims its weapon at his people” -Simon Bolivar. Image Credit: EFE

The issue is not that Maduro chose to enact a Constituent National Assembly, because he has the constitutional right to do so, but rather that only a referendum can approve such decision, where voters can sign whether they agree with the initiative or not.

Maduro skipped this crucial step because over 80 percent of Venezuela does not approve his administration. That’s also why the government has not held any legal electoral process because in any electoral scenario the government would lose by a landslide.

Opposition leaders argue that protesters are only violent when armed forces repress them and that instead of solving Venezuela’s problems the government is “fleeing towards the front,” pushing their communist agenda and heightening tensions. Their actions may allow them to justify a coup against Maduro and to label the opposition as terrorists.

The process for the Constituent National Assembly is set to start on July 30, and just one month prior, political tension in Venezuela is at the highest it’s ever been in its history.