2015 named the warmest year on record

The largest concentrations of methane, carbon dioxide, and nitrous oxide ever are some of the record-breaking markers contained in the 26th edition of the State of the Climate report.

The American Meteorological Society published their State of the Climate of 2015 with the help of 456 authors distributed throughout 62 countries.

The primordial cause of concern appears to be the high concentration of greenhouse gasses in the atmosphere, but the atmospheric phenomenon known as El Niño had one of its strongest appearances since the 1950’s.

2015 and still no progress in stopping climate change

2015 saw a higher global temperature than average. When compared to the preindustrial era, 2015 is more than 1 °C hotter. In the case of local high temperature, the city of Vrendendal in South Africa reached 48.4°C, another new record.

In the event of the Arctic, the land surface was also over 1 °C hotter than the average between 1981 and 2010, joining 2007 and 2011 for the record of all-time-high. Due to the increase in temperature, the integrity of Arctic ice has been reduced, while also increasing the temperature of the global sea surface. The only places that saw a lower land temperature than average were some regions in southern South America, Antarctica, Greenland, and eastern Canada.

The tropical storms near the equator also increased to 101, mainly setting itself apart from the average of 82 from 1981 and 2010.

The United States saw its second warmest year since records began in 1895, while May of 2015 was credited as the wettest month ever registered in the country. Also, the sequence of the tropical storms Kilo, Ignacio and Jimena in the U.S.  was the first time three large hurricanes occurred in succession since records began in 1949.

The same reasons as they were 20 years ago

The main reason why global temperature is rising appears to be the accumulation of greenhouse gasses in the atmosphere. Currently, CO2 levels stand at 400 parts per million, a staggering amount considering the 280 parts per million that were present during the industrial era. 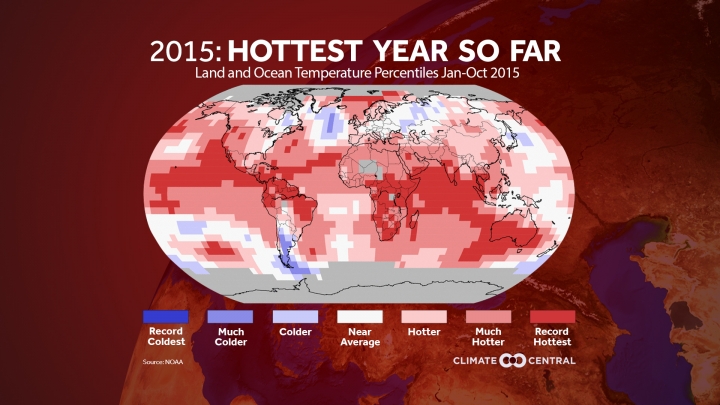 2015 saw the United Nations Climate Change Conference in Paris. Negotiations were held to comply with the Paris Agreement, a consensus among 196 parties to adopt measures to reduce the effects and causes linked to climate change. 174 countries have signed the agreement so far.

One of the goals was not to allow earth’s global temperature to rise by 2 °C when compared to preindustrial levels. The signing parties will also make the effort to limit the increase to 1.5 °C, which means that there has to be a period of 20 years, starting in 2030, with zero greenhouse gas emissions. The Paris Agreements have been criticized as no enforcing measure mandates compliance or for countries to forcefully ratify the agreements.

Each country has to set a specific goal of emission reduction, but there is nothing that forces them to determine such target. The highest polluters are China, the U.S., India, Russia, Canada, Australia and Indonesia, which are responsible for half of the world’s greenhouse gas concentration. There is no measure such as a tax or a penalty to ensure adherence to the agreements.

It is possible to deal with climate change

Recently, scientists determined that the ozone layer has partially healed, which may suggest that there is still hope in preserving our planet’s atmosphere when countries make an effort to protect the ecosystem. The restoration of the ozone layer was attributed to world leaders pledging commitment to the Montreal Protocol. The hole in earth’s ozone layer was discovered in the 1950’s, but recent studies suggest that its area has been reduced by over 4 million square kilometers.

The Montreal Protocol was ratified in 1989, and it has been effective because world leaders committed to reducing the existence of components linked to ozone layer depletion, known as chlorofluorocarbons. The difference is that global warming is a different subject, although it is related on a theoretical level.

The amount of CO2 present in earth’s atmosphere in 2015 compared to 2014 represented the largest yearly increase ever, while 2016 already appears to have surpassed the latest measuring. According to computer models, there will be a 7 °C increase in temperature compared to preindustrial levels by the year 2200.

Because earth’s temperature rises, Arctic ice melts and the ocean levels rise. Because there is more water in earth’s oceans, it can absorb more heat while also allowing a larger amount of liquid to evaporate. Water vapor counts as a greenhouse gas, which in turn also contributes to global warming. Although climate models are moderately precise, there is still not much information about every single process that is linked to earth’s ever-changing atmospheric temperatures.

Most of the information comes from analyzing past temperatures. It is known that 55 million years ago, earth’s poles temperatures were 12 °C hotter than they are today, which allowed palm trees to be present at the Arctic Circle. In other words, there was a time when there was no ice whatsoever on either of earth’s poles. Scientists believe that the reason why earth’s temperature stabilized is the greenhouse effect itself, as it is responsible for promoting climate change. Humans just have to learn how to live in coherence with it.