Home » Headlines » Health » An autistic girl has received over 10,000 birthday cards from all over the U.S.

An autistic girl has received over 10,000 birthday cards from all over the U.S.

A 19-year-old girl has received thousands of birthday cards from people from different parts of the U.S after her cousin’s pledge for birthday wishes became viral on Facebook.

Hallee Sorenson is a teenager from Bangor, Maine, who happens to have autism. Last year, Sorenson was stood up by her friends on her 18th birthday, sobbing to her mother and eating her birthday cake alone.

Rebecca Lyn, Sorenson’s cousin, turn to her Facebook account to ask her friends and people in the social media for birthday cards to celebrate her cousins 19th birthday.

The post published by Lyn featured a picture of the girl eating her birthday cake alone in a bowling alley last year. She explained how hurt she felt when she saw her cousin so hurt and disappointed. Sorenson can be seen in a table surrounded by balloons and birthday decorations alone.

The post published by Lyn received over 236,000 views and shares, along with comments and likes of people supporting Lynn and Sorenson assuring this year the teenager would have a different birthday.

Rebecca Lynn published a post on her Facebook account on June 7th that read “I NEED A FAVOR.” To continue explaining what had happened to her cousin last year and describing her as a person.

“This is my cousin Hallee. I’d like to tell you a little bit about her. First off, she is a beautiful young woman both inside and out. She lights up a room with her smile. Hallee is funny, sweet caring, smart, an athlete, a jigsaw puzzle champion and a best friend,” wrote Lyn to continue describing her cousin.

Lyn told how proud she is to be related to her cousin and assured that even though she has autism, she sees it as a small detail that doesn’t define her cousin as the person she is. Further in the publication, Rebecca Lyn explained how Hallee was disappointed at her last birthday party.

“She wanted to go bowling, have fun, eat cake and ice cream. Halle sat at her party anxiously waiting for her friends to arrive, but they never arrived. Not a single one. Below is the picture of her eating her birthday cake alone,” wrote Lyn.

The aunt explained that her cousin will forever have the mind of a child and that specific day she was heartbroken and hurt. So she decided to ask for online support to make Hallee’s 19th birthday special.

After Lyn had published her cousins’ picture, people started showing support for the girl and today the aunt announced on her Facebook profile that they had received over 10,000 celebration cards along with presents and balloons.

“We aren’t even a week in and she’s already received over 10,000 cards. You are all so wonderful. Thank you,” wrote Rebecca Lyn on her Facebook.Showing a smiling picture of Hallee Sorenson and boxes of cards.

Along with the cards, Hallee received a lot of birthday presents including a handmade afghan crocheted by someone’s grandmother in the state of California. Rebecca Lyn had said in the Facebook posts that they were not asking for presents, although they were grateful.

The family received presents, stuffed animals, and all sorts of gifts. Lyn assured they would keep some for Christmas but would donate the rest to a noble cause.

Some users of the social media were concerned the family had put up their home address so publicly, and Bangor police officers had to show up at 9:30 pm to assure they were ok.

Hallee’s story has gone viral, and she even appeared in a local newspaper, what had the now 19-year old, happier than ever.

Recently another video of a boy with autism went viral after his dad took him to a Coldplay concert, which was his favorite band. In the video, it can be seen both the father and the son crying as they sing songs of the band.

After the video had gone viral, even Coldplay commented the happening, assuring that’s the kind of things that make “everything worthy.” 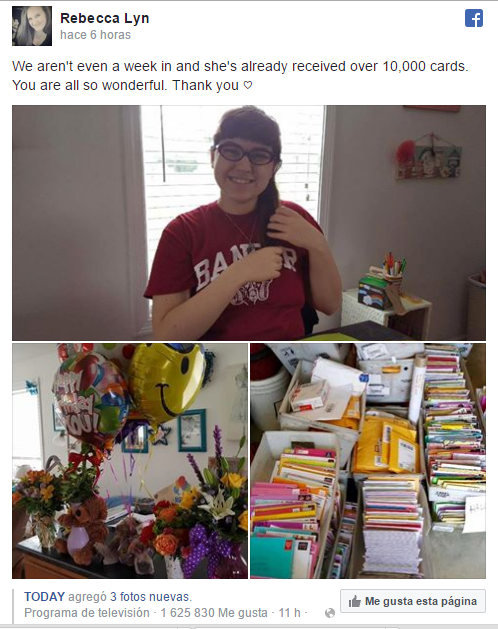 Autism spectrum disorder (ASD) is a neurodevelopmental disorder that is characterized by having an impairment in social interaction, and in verbal and nonverbal communication. Autistic kids show the first signs of the disorder in their first years of life, normally before turning three.

The disorder can be associated with intellectual disability and with difficulties in motor coordination, attention and health issues are also related to the disorder. Researchers, physicians, and experts have assured the most important fact of autism is early detection.

According to the Centers for Disease Control and Prevention (CDC), one out of 68 American children are diagnosed with ASD, this rated have increased in the last 40 years of research.

Research has also shown that the disorder is more common in boys than in girls, 1 out of 42 kids are diagnosed with ASD and 1 in 189 girls have the disorder, according to autismspeaks.org.

The cause of autism has been widely studied, and specialists have determined that there is no such thing as a “single cause” for the disorder. There is a significant amount of rare gene changes and mutations that are related to ASD.

It appears that the main reasons for ASD are a combination of ASD risk genes, environmental factors, and early brain development. The majority of this risks are faced before birth and during birth.

Some of this risks include Advanced parental age at the time of conception for both the mother and the father, maternal illness during pregnancy, difficulties during birth. This factors in combination with genetic risks can cause ASD.

Many investigations have suggested that prenatal vitamins with folic acid and a rich diet of folic acid, can help reduce risk factors for expecting moms.

It is important to understand that there’s not a single type of autism, children, and patients with the disorder have all different characteristics as they develop. Some may have bigger abilities in different aspects.

“About 40 percent have average to above average intellectual abilities. Indeed, many persons on the spectrum take deserved pride in their distinctive abilities and ‘atypical’ ways of viewing the world,” describes the website AutisimSpeaks.

Shanghai Disneyland has been inaugurated < Previous
NASA’s Journey to Mars’ posters invite you to go! Next >