World’s Largest Airplane Destroyed in Ukraine; to Be Rebuilt at Russia’s Expense

Ukrainian authorities said Russia has destroyed the world’s largest and heaviest aircraft parked in Kyiv, Ukraine’s capital. The alleged destruction of the Antonov AN-225 by Russia’s missiles in the ongoing invasion of Ukraine signifies an escalation in the war initiated by Russia against Ukraine. 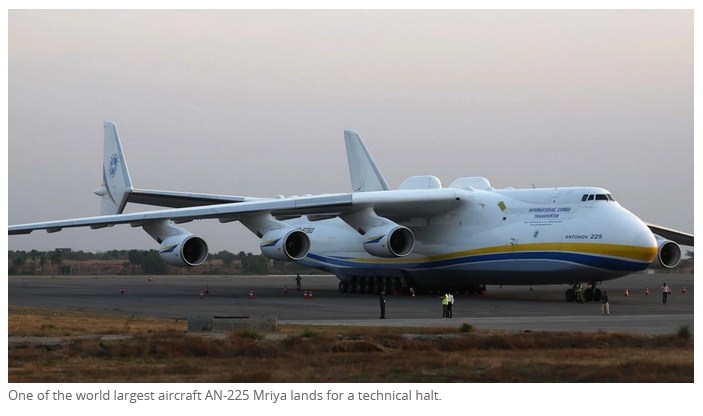 “Russia may have destroyed our ‘Mriya’. But they will never be able to destroy our dream of a strong, free, and democratic European state,” Kuleba tweeted. “We shall prevail!”

The Ukrainian defense company, Ukroboronprom, manages Antonov Company which designed and constructed the Antonov AN-225. Ukroboronprom said the reconstruction of the Mriya will cost about $3 billion over a five-year period, and that the reconstruction will be borne by Russia. The Antonov Airlines said the AN-225 had been undergoing maintenance, with one of its engines removed for repairs on February 24 when it was hit by Russian missiles.

“The restoration is estimated to take over 3 billion USD and over five years,” the statement said. “Our task is to ensure that these costs are covered by the Russian Federation, which has caused intentional damage to Ukraine’s aviation and the air cargo sector.”

The construction of the AN-225 was first debated in the 1970s, and it took to the air for the first time in 1988 after completion by the Antonov Company. It is the largest and heaviest aircraft ever constructed, and it has the largest wingspan of any aircraft in the world. It is powered by six turbofan engines and capable of airlifting a payload weighing 250 tonnes.

Having been in operational service for more than 30 years, the Mriya has been used to transport relief materials to countries facing natural disasters and recently the COVID-19 pandemic around the world. It has been used to airlift relief materials to Haiti and the Dominican Republic when the countries suffered a massive earthquake in 2010. It has also made appearances at air shows, where it draws global fascination.

Aviation fans lamented the loss of the AN-225 on social media with many bloggers condemning its destruction.