Five people were killed in a helicopter crash while sightseeing Tennessee’s Smoky Mountains.

A tourist Bell 206 chopper model, crashed into Tennessee’s Smoky Mountains on Monday, April 4th, the accident left five victims after being destroyed by a deadly fire that could be seen from the air.

Reports on the accident

The Federal Aviation Administration (FAA) assures the crash occurred around 3:30 pm local time, while flying in Sevier County Tennessee, officials assure the helicopter was destroyed by the fire, said FAA spokeswomen Kathleen Bergen to the media. 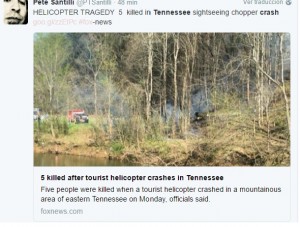 The helicopter belonged to the company Smoky Mountain Helicopters,  a service that offers scenic helicopter tours of the national park since the year 1964.

A couple of hours after the accident, emergency vehicles approached the site near Sevierville outlet mall.

According to reports the smoke of the crash could be seen all over the woods. The Tennessee Emergency Management Association confirmed the 5 victims, through spokesman Dean Flener, who assures no ground-man or homes were affected by the crash.

“There’s not much left of the helicopter, it’s pretty much gone from the fire. There’s a little bit of the tail, and that’s about all that’s left” Said Pigeon Forge Fire Department Chief, Jack Baldwin to ABC News. 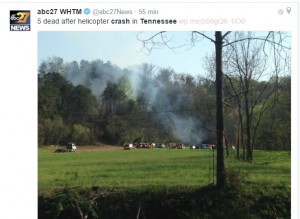 Until now, the owner of the Smoky Mountain Helicopters has not issued the matter in a direct way.