The residents of Texarkana, a city 200 miles from Dallas in Texas, witnessed a fish rain before 2021 wrapped up. City officials called the phenomenon “animal rain” and explained that it occurs when a waterspout picks up fish from rivers and rains them back to earth later, CNN reports. 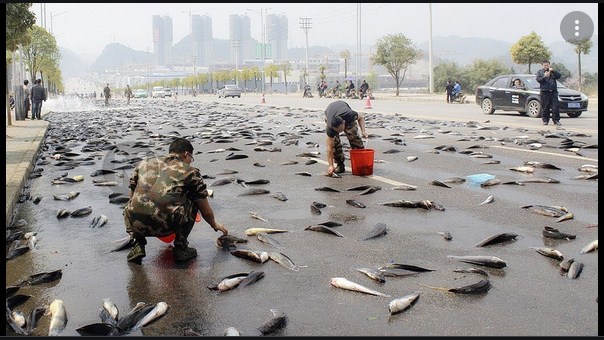 Many of the fish that fell from the sky in Texarkana were no larger than the palm, and residents were elated to witness the event as they went about their backyards and sidewalks picking up stranded fish.

“2021 is pulling out all the tricks…including raining fish in Texarkana today,” the city of Texarkana wrote. “And no, this isn’t a joke. While it’s uncommon, it happens, as evidenced in several places in Texarkana today. And please, for the sake of everyone, let’s tiptoe into 2022 as quietly as possible.”

Fish do not come from the sky, and the idea that they come with rains is a fallacy. Scientists said waterspouts – which are tornadoes that move over water and that pick up columns of water, mist, and other objects – scoop up fish, frogs, and crabs among other objects from the ground. These are rained back to the earth during heavy rainfall when the waterspout losses energy.

Sometimes a much stronger waterspout – known as updraft – can pick up snakes and birds that come with the rains after some time in the atmosphere.

A Texarkana resident, Tim Brigham, said he was thrilled to see the fish falling in his backyard and that he gathered them up to be used as fishing bait. Another resident, James Audirsch, said he was working when the rain started and the next thing he saw was fish falling to the ground.

“There was a loud crack of thunder, and when we opened up the bay door, I looked outside, and it was raining real hard and a fish hit the ground,” he said.

This is not the first time that fish would be seen to fall from the sky. In 2017, schools officials in Oroville, California, said more than 100 fish fell from the sky during rainfall onto their school compound. And residents of Lajamanu in Australia have witnessed fish falling during rainfall at least three times in the last several years.

Business Tips: How To Improve Your Private School < Previous
All That You Need To Know About Laboratory Information Management Systems Next >
Social Connection
Latest News