Ancient stone statues known as Moai in the Rapa Nui Natural Park of Chile have been razed by fire. Allegedly caused by the nearby Rano Raraku volcano, the fire started on Monday and charred almost 1,000 stone-carved statues over 100 hectares of the island. 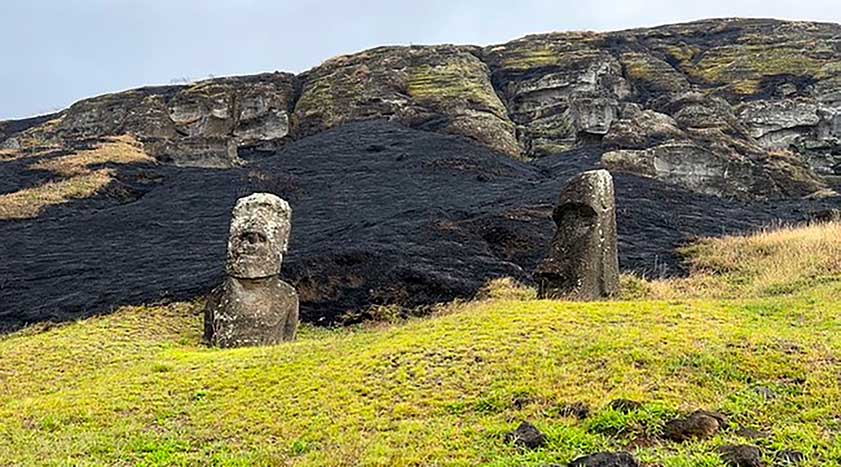 The director of the Ma’u Henua community, Ariki Tepano, said the devastation caused by the fire outbreak was irreparable and beyond what the eyes can see. The Undersecretary of Cultural Heritage in Chile, Carolina Perez Dattari, said the national park which attracts thousands of tourists from around the world has been closed down to enable officials from the National Monuments Council (NMC) to assess the extent of fire damage.

A UNESCO World Heritage site, Easter Island is about 3,500 km (2,174 miles) off the coast of Chile. It features about 1,000 Moai statues carved from solid basalt by ancient Polynesian people approximately 900 years ago – between 1400 and 1650. The largest of the megalith weighs 74 tons and stands tall at 10 meters, with most of the others averaging 4 meters (13 feet) high.

Most of the carved figures were placed around the island, facing inward to form a wide ring. According to Rapa Nui legend, the statues represented the spirit of a prominent ancestor, and they were deified in indigenous culture as the incarnation of the ancestor in this world. Tourists often wonder how the ancient Rapa Nui people who settled on the island were able to carve and position the Maois in their current form.

In 2020, a resident on the island was arrested and prosecuted after his truck crashed into one of the carved figures, destroying it in the process. Tourists are also often warned to not deface the Moai or do anything that would undermine their sculptural and architectural integrity as national monuments. A number of people opined that the fire that charred many of the giant statues was deliberately started.

“The damage caused by the fire can’t be undone,” said the island’s Mayor, Pedro Edmunds.