China’s Chang’e-5 lunar probe plants the Chinese national flag on the moon surface before its return journey to Earth. The lunar probe left Earth for the moon and arrived at the lunar surface on Tuesday to gather lunar soil and rocks as well as use its ground-breaking radar to scan the soil for signs of water and minerals. 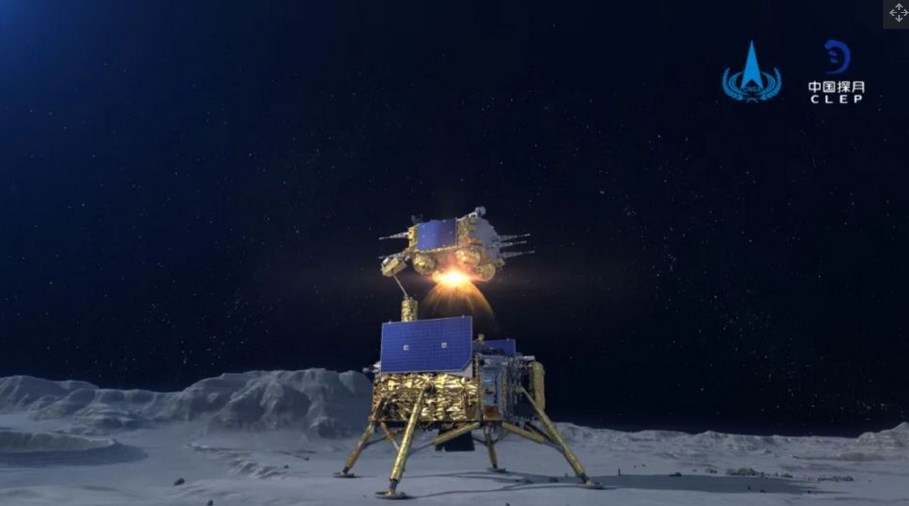 The probe also took several photos and videos of its surroundings when it landed on the Sea of Storms and transmitted videos of its activities while drilling 6 feet into the soil to scoop up samples to be later analyzed on Earth. The probe collected about 4 pounds of rock samples which should tell the history of the moon and the environmental changes that had occurred on the lunar planet for centuries.

The last time any country sent a probe to the moon to collect samples was in 1976 – 44 years ago. The first country to send a spacecraft to the moon was the United States in 1969, followed by the defunct USSR, and then China in 2013, 2019, and 2020. Each country had always installed its national flag on the lunar surface after landing on the moon, and China just did the same with the Chang’e-5 probe.

The Global Times of China reported that the first real Chinese flag was just planted on the moon – the five-star, red banner made from the original fabric. This latest flag is expected to last for many years on the moon and it was developed by the China Space Sanjiang Group under the state-owned China Aerospace Science and Industry Corp (CASIC).

“But China is about to showcase our own national flag as well, which I believe is a recognition of the achievements and breakthroughs that we have made, which will be the most valuable thing,” Song Zhongping, a Chinese space official stated.

The flag was opened with a type of rod which is usually used to extend solar panels for satellites and certain kinds of spacecraft. Every part of the flag was reinforced with special protection that would make it very resistant to the extreme weather conditions on the moon as well as any other severe lunar environment that may develop over time.

After the probe completed a firm planting of the Chinese national flag on the moon, the machine lifted off to rejoin the spacecraft in lunar orbit for the return journey to the Earth, Chinese space officials stated. China’s foreign ministry spokesperson, Hua Chuying, tweeted images of the installed flag and wished the probe a safe journey back to our Earth.

“On the way home! Chang’e-5 blasted off from the moon with the lunar samples,” Chuying tweeted. “Have a safe journey home!”

5 Types of Lighting to use for Backyard < Previous
Focusing on Your Finances: Decoding Paycheck Stub Abbreviations Next >