A gunman identified as Stephen Paddock, 64, carried out the deadliest mass shooting in modern United States history. From a 32nd floor of the Mandalay Bay hotel, Las Vegas, he killed at least 50 people and injured more than 400 concertgoers who attended the Route 91 Harvest Festival Sunday night. The motivations of the massacre remain a mystery for the police.

Las Vegas Police first received reports of an active shooting at about 10:08 p.m. during the performance of country music star Jason Aldean. Federal authorities have not found any connection to international terrorism, but the attack was “obviously well-planned,” as former national FBI spokesman John Iannarelli told Fox News.

The also retired FBI agent drove past the scene of the event a few minutes before the shooting started. He revealed that FBI and police are set to contact the gunman’s friends and relatives and are already carrying out a forensic review of Paddock’s electronic devices.

The gunman, who reportedly killed himself before police found him, had been in the hotel room since September 28. Clark County Sheriff Joseph Lombardo said as many as ten rifles were found in the room, as reported by The New York Times. Iannarelli noted that the multiple weapons and ammunition were expensive.

Police had initially identified a woman as a “person of interest.” Marilou Danley was reportedly the gunman’s roommate, but detectives from Las Vegas Metropolitan Police Department talked to her and confirmed she was not involved in the attack.

Paddock was a resident of Mesquite, Nevada. His brother, Eric, told reporters outside his home Monday morning that he and his family were shocked to hear the news and said Stephen has no history of mental illness, according to Fox News. Additionally, he revealed that his brother had retired to Las Vegas because he liked gambling.

The Department of Homeland Security declared Monday that there were no clear indications of threats to other public venues in the United States. The department added that it was cooperating with partners to investigate the massacre.

As yet another music artist who witnessed a terror attack during their performance, Jason Aldean took on Instagram to express his condolences to the victims and inform that he and his crew were out of danger. He was singing his last song of the night when the gunfire erupted.

“My Thoughts and prayers go out to everyone involved tonight. It hurts my heart that this would happen to anyone who was just coming out to enjoy what should have been a fun night. #heartbroken#stopthehate,” he wrote in his Instagram post.

The sold-out Route 91 Harvest Festival offers three days of country music and Sunday night’s performance was the final of 2017. It took place in the MGM-run Las Vegas Village and Festival Grounds, which has a capacity of 40,000 people. It is located near the Mandalay Bay Resort and Casino.

With a death toll of at least 50 people, the attack at the sold-out Route 91 Harvest festival marked the deadliest mass shooting in modern United States history. The gunman who opened fire at the Pulse nightclub in Orlando in June 2016 killed 49 people.

The massacre at the country music festival took place more than four months after the suicide bombing that killed 22 people at an Ariana Grande concert in Manchester, England. In November 2015, shooters killed almost 90 people in the name of the Islamic State terror organization at the Bataclan concert hall in Paris when Eagles of Death Metals were on stage. 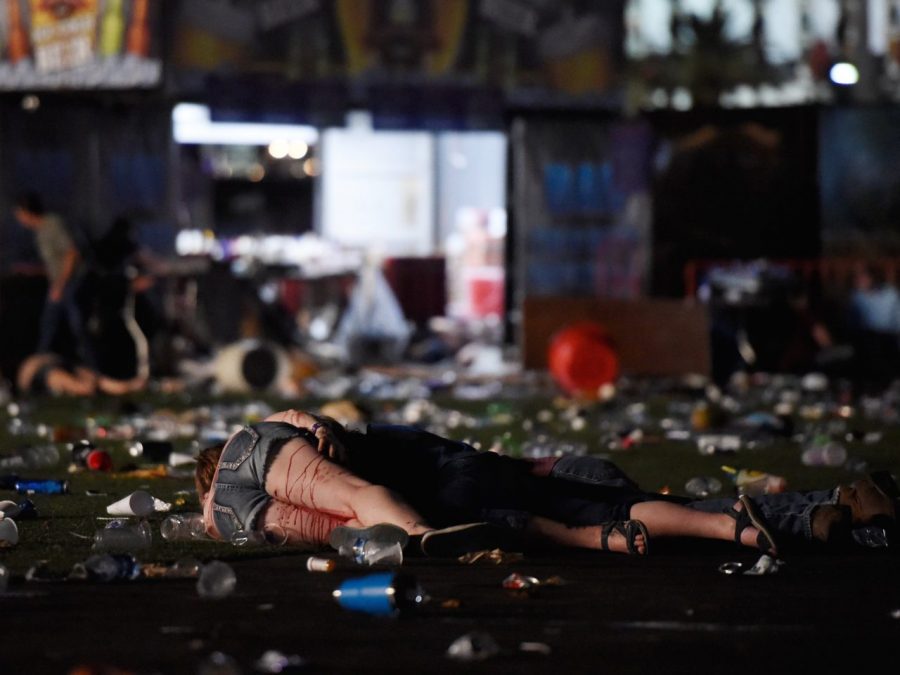 In the last four decades, more Americans have died from guns than the total of all citizens who were killed in all the wars in American history, according to a report by Nicholas Kristof from The New York Times.

About 92 Americans die each day from guns, including suicides, accidents, and murders. According to David Hemenway of Harvard, children in the U.S. are 14 times as likely to die from guns as kids in other developed countries.

Even though the United States has 300 million firearms and gun death rates are higher than in Europe, some steps could help reduce a number of victims of gun violence.

Universal background checks should be imposed on anyone willing to buy a gun to make it more difficult for criminals or terrorists. The report says that four out of five American citizens support this measure, which could work if combined with the minimum age limit of 21 on gun purchases. The second step is already a reality in many states which have banned gun purchases by people under 21, just like the law on buying alcohol.

The report includes proposals to ban possession of guns by people subject to a domestic violence protection order, make hard-to-remove serial numbers to limit gun purchases, and require safe storage for anyone possessing weapons to prevent theft, self-inflicted injuries, and accidents by kids.

Kristof also suggests investment in research to find out what legal measures would be most effective in reducing death rates. Finally, he adds that experts believe a series of well-planned, reasonable safety steps could make a significant impact by reducing gun deaths by one-third.