EGYPT – Researchers from Cardiff University’s School of History has found the mummified bodies of about eight million dogs in an ancient Egyptian catacomb.

The researchers believe the catacomb to have been made to Anubis – the Egyptian god of tombs and ruler of the underworld, usually depicted as a man with the head of a jackal; and they think the catacomb signified two main epochs in Egyptian history – starting from when independent governorship ended in the ancient nation, to when Greece ruled Egypt – known as the Ptolemaic Period (BCE 332-30). 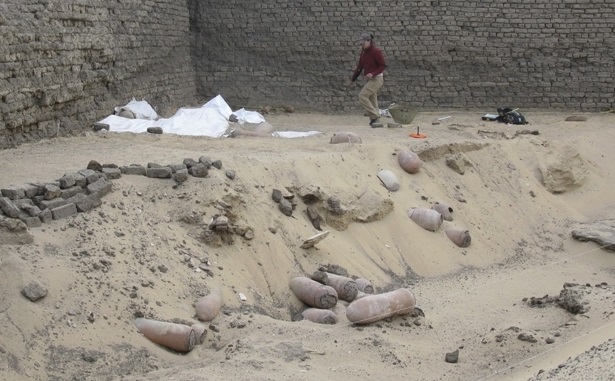 Although the catacombs had been there for centuries, they are at the northeast of the step pyramid at Saqqara.

Ancient Egyptians mummified their dead so as to make them ready for use in the afterlife, and costly personal properties and animal remains were often buried with the dead to ease its journey in the afterlife.

However, family members and other loved ones could always visit the catacombs to pay their last respects, often buying symbolic statues and vases that they place as offerings beside catacombs.

Researchers took it upon themselves to explore the catacombs because this part of the pyramid had remained largely unexplored, and what was within the structure remained mysterious to people.

Because the condition of the place made such endeavor very tasking and impossible.

There was an 1897 map that showed some parts of the catacombs, and it was not detailed enough and did not offer much help to archeologists. But Cardiff University experts reconstructed parts of the monument and discovered that mummies were stolen from the catacombs within the 19th to 20th centuries, and maybe used to produce fertilizers.

A further examination of the millions of mummified dogs within the catacomb revealed that most of them died young, suggesting that dog breeding centers could have been used to nearby at the time to provide young puppies that were mummified for sacrifice to the dead.

Although scientists continue to study the catacomb further, they found a 48-million-year-old fossil of an unidentified sea creature in the ceiling of the catacomb.

Leave a Reply to Don B Cancel reply